Every period of Russian history is embodied not only in the pages of textbooks, but also around us. The surviving monuments of culture are able like nothing else to tell future generations about the habits, traditions and other features of the past. Preserved individual buildings and complexes of buildings full of secrets and charm of antiquity. 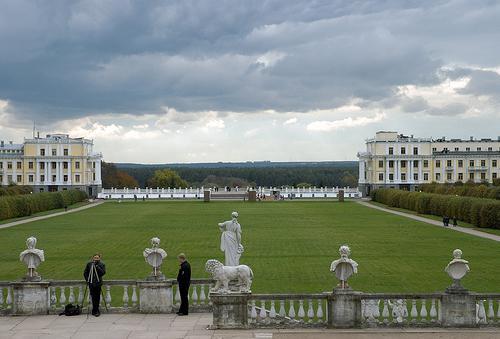 Map of the suburbs of the capital is full of symbols, indicating that at one time the area was located quite a lot of estates. Some of them have been preserved until the present time. Part of the estates were destroyed or ruined during the revolution or during the great Patriotic war, when the main attack took over Moscow. Arkhangelsk – estate, located in Krasnogorsky district. It is an outstanding architectural ensemble, created in the late 18th century. This masterpiece was the result of several generations of talented artists. Halls of the Museum keeps a rich collection of pottery and porcelain. In the Arkhangelskoye estate is open for visits. Here you can see a collection of Western European painting of the ages of 17-19. Alexander Benois, Russian painter, critic and art historian, described the illusion of foreign estates, achieved thanks to the extremely successful realization of the Western style of those times. In his opinion, Archangel is superior to the many aristocratic villas and palaces built during the reign of Elizabeth and then of Catherine II. He said that the estate is like no Russian at home, but rather on an Italian Villa or a French Chateau, with countless marble columns, terraces and cropped alleys. 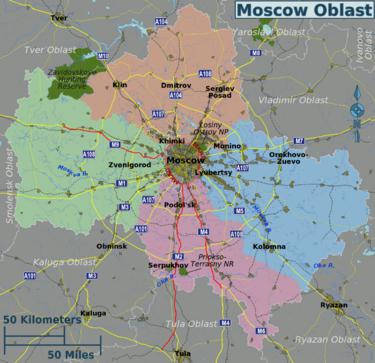 The Village in which the estate exists since 1584. And before that it was called Apology. The current name was given after the completion of the temple of Archangel Michael in 1667 by order Ya. Odoevskogo. Single-domed Church with chapels, decorated with rows of corbel arches, evidence of the medieval past of the house. The yard, as sanctified territory since 1826, is fenced with a brick wall type of monastery, with a pair of side wooden towers and a big arch. Was chosen the beautiful location: the edge of the hill above the old channel of the Moscow river. The area is today untouched by civilization: the temple is surrounded by majestic pines, creaking under the pressure of the river winds and showered needles of the dome and the tomb of T. N. Yusupova, who was buried at the age of 22 years. First over the grave stood a statue of the "angel of prayer" with wings, the authors of which are M. M. Antokolsky and N. V. Sultans. 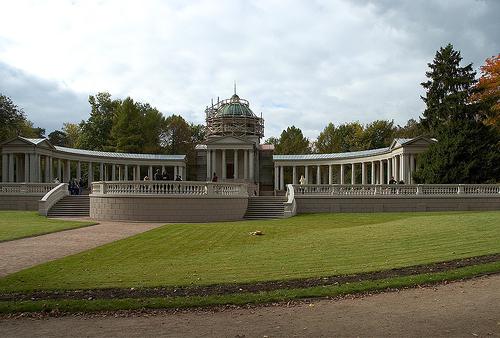 In the Arkhangelskoye estate is open for group tours and individual visits. Keepers of the monument will tell the guests about the fate of the estate. The basis of the architectural ensemble laid N. A. Golitsyn in 1780, After his death, 30 years later, the estate was bought by N. B. Yusupov for 100 thousand RUB. He started construction. The accomplishment was attended by talented Moscow architect E. D. Tyurin, S. P. Melnikov, O. I. Bove, as well as prominent fortress architects, among whom Bredikhin, Borunov, Shestakov, Strizhakov and Nabutovsky. Arkhangelsk (manor house), a photo of which is presented in the article, with its longitudinal-axial composition, different scale, future-oriented distant species. The Palace occupies the main planning axis erected on the upper terrace, French garden, as if on the catwalk. Art L. A. perfilyeva believes that it was built by architect de Guerin, who was ordered Golitsyn. The architect, most likely, in Russia never was, consequently, not know was to him and to Moscow itself. Arkhangelsk (estate) – the only work of the architect in the capital and the country as a whole. This is evidenced by the fact that the name of the architect more than any public record is not found. 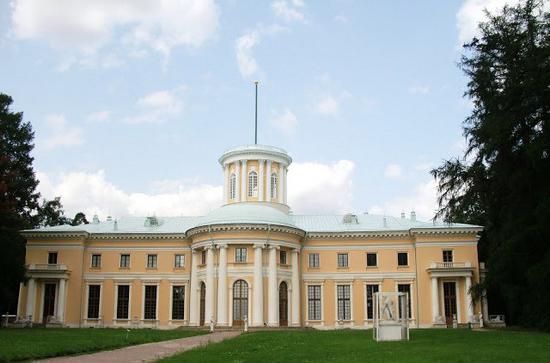 Interior of the Palace

The Fate of the external design of the building, as, indeed, himself, is pretty sad. In the period after adjustment by the officials of the war Department, to whom the sanatorium "Arkhangelsk", one decision deprived the structure of electricity and heating. Predictable consequences of such hasty decisions do not have to wait long: inlaid parquet floors, covering the floors, swollen, and unique molding instantly damp, the walls are covered with the first drips and then a mold. Before Museum visitors appeared unflattering picture of running facades and broken glass, which were killed a unique decoration of the rooms. In this state, the Palace stood for a few years, and only in mid-2009 was carried out some repair work. Thanks to them in hours Arkhangelskoye estate is open to visitors who can tour several restored buildings. 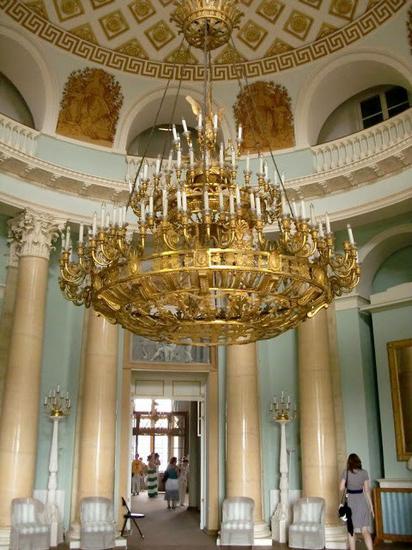 The style of the two sites created in 90-e years of the 18th century by Italian architect, closely connected with the house and outbuildings. They join the ladders at the sides of the building Central grotto. Walkways, balustrades and the stalls are decorated with sculptures of ancient gods and heroes, scientists and the Roman emperors, allegorical compositions as well as sculptures of dogs and lions. Some of the busts and the figure is partially repeated the famous examples of classical art, individual parts of them are unique decorative statues of those times.

Regular Park retained the pink gazebo, a fountain, erected by Catherine II monument with architectural framing, as well as leading to the sculpture of A. S. Pushkin alley with a variety of marble figures. The most characteristic feature is the ruin gate of the lower terrace, in the style of Huber Robert. In the opposite side of the garden, behind the buildings of the military sanatorium, built in the 30s years of the 20th century by architect V. P. Apyshkov recreated columned gazebo. She took her place on a small artificial mound in the 60-ies. English Park, following the road hides the separate building of the estate theatre. This is one of the most interesting buildings, though visitors often do not notice. 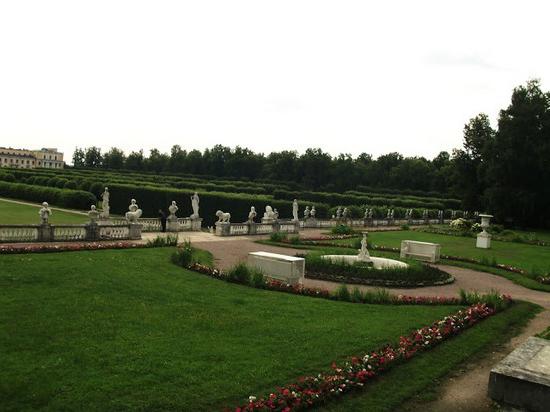 During the existence of the estate of the time were decorated, it is hard to imagine many of the lost buildings. It is known that although their style sometimes differed, common features inherent in the buildings of the Western European middle ages, is still present in all. To date, the economic complex survived:

- two-story service wing with a mezzanine, built in the late 18th century, and made in the traditions of classicism;

- wood guest house where we stayed coming since 1810.

One of the last buildings is the Church-the tomb of Yusupov, which was built in the years 1909-1916. Contributed to Klein, B. G. Barkhin and A. D. Chichagov. Spatial arrangement is impressive. In the centre on a high basement is a cruciform Church with a dome, rotunda. Far projecting Corinthian portico with converging to it two rows of columns of the Doric order, made of artificial marble, forms a semi-oval. 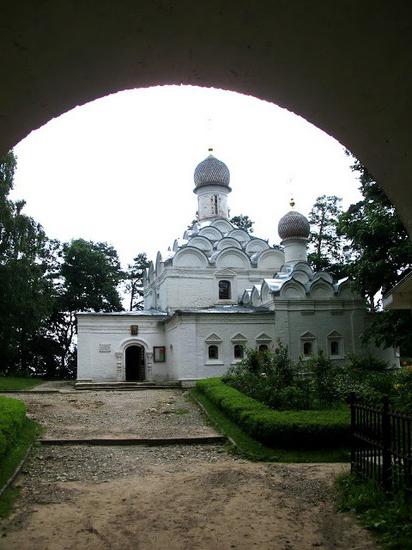 The Arkhangelskoye Estate (how to get to the estate - will be discussed below), is located at 5 kilometer of Ilyinskoye shosse. Visit the Museum, and arrived by car. The alternative is public transport. From Moscow starting point – the metro station "Tushinskaya" where to Arkhangelsk buses №№ 549 and 541 and the bus number 151. From Krasnogorsk, you can take a bus. No. 824, 520. If you decide to use the railway, take the train to the station where you can bus 49 and 31. Opening hours: the estate Arkhangelsk in the period from 1 may until 30 September and is open for visits from 10 am to 9 PM, in the remaining months to 18.00. Exhibitions in the buildings during the season on weekdays from 10.30 to 17 hours, on weekends and holidays – 18.00. In low season up to 4 to 5 PM, respectively. Monday and Tuesday at the HOMESTEAD the weekend, keep in mind also that every last Wednesday of the month is a sanitary day.

Entrance fee to the Park is 100 RUB, a visit to the office wing, the colonnade and the Grand Palace 100, 80 and 50 rubles. Can see all the sights if you wish you can own, but in the theater Gonzaga to get out only with a group purchasing a ticket for 200 rubles. In the Hermitage allowed photography in the pre-payment of 50 rubles.

side is on a small Peninsula between the village of Manavgat and Antalya. It is bordered by the Taurus mountains. Holiday in Turkey, every tourist can see from a close distance of their amazing beauty, making Hiking on various mou...

People who really loves to travel the world, know about the international tourism organization Four Seasons, and that its hotels located in almost every big city, get from the guests only positive feedback. This canadian company f...