The article will look at the monument «Children-victims of adult vices”. It's quite an interesting sculpture, which definitely deserves our attention. You can find her on Bolotnaya square in Moscow.

The Monument was designed by Mikhail Shemyakin. The author has attempted to translate into reality the image of the struggle between good and evil. My composition is sculptor created to draw the attention of all concerned on how we shape the present and future generations. It's never too late to start over.

In the center of the sculpture “Children-victims of adult vices” depicts a boy and girl who are trying to move forward with a blindfold. Under the feet of the kids are open books with fairy tales that have been read. Around them surround the figures – those vices. It depicts the drug Addiction, Theft, Ignorance, Alcoholism, Pseudoscience, Prostitution and Indifference. The last defect rises above the rest and is the most important. There is also the Sadism, the Exploitation of child labor, War, pillory for those who lost memory, Poverty and violence. 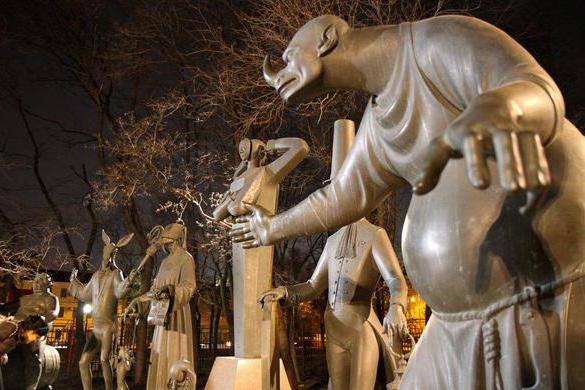 Mikhail Shemyakin has been working on this composition at the personal request of Luzhkov. The mayor also took an active part in the process of creating the monument. The press wrote that during one of the meetings of the architect and the mayor of the last alive sprang from his chair to personally demonstrate how to look like a figure of Sadism. In the end, this posture Luzhkov was reflected in the metal.

After the creation of the sculpture was attacked by vandals, the city authorities decided to open the composition only at certain hours, to enclose it with a fence and put guards. The grille rises at 9am and falls at 9 PM. 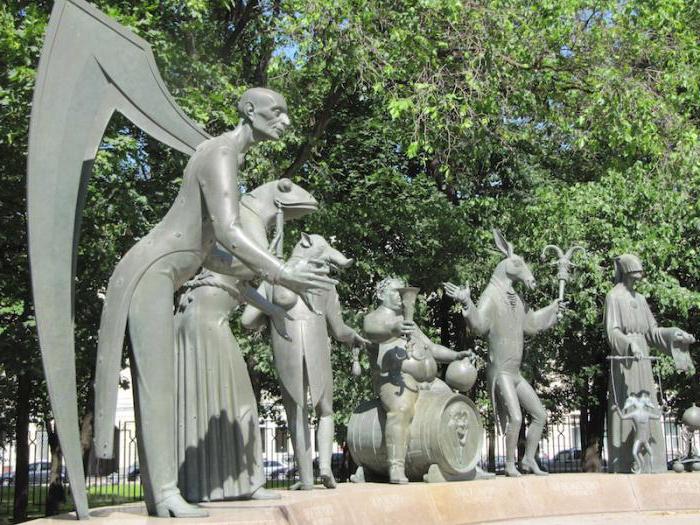 Sculpture “Children-victims of adult vices” on Bolotnaya square many times criticized. Most of these were statements of a particularly religious people. They don't like that the vices depicted too stressed out. Abramenkova V.-doctor of pedagogical Sciences and researcher RAO believes that the child's psyche, this sculpture may be influenced negatively. She also focuses on the fact that it is rather a monument of the vices and not the children.

“Children-victims of adult vices" let's start with the figures of drug Addiction. The author of the composition showed the way in the form of count Dracula, dressed in a tuxedo – be yourself an angel of death. In his hand is a small packet of heroin and a syringe. Dracula offers at an affordable price like “to leave” from the problems of this world.

Prostitution Shemyakin depicts the image of a toad, and in this sense there is some overlap with the image of the Princess frog. Creating a curvy shape and a sexy body, but it covered a nasty wart and a belt, one can see the snake. In a broader sense than just prostitution under this sculpture refers to the hypocrisy and gross immorality of the person, not experiencing sincere feelings. One well-known bloggers wrote that under the hypocrisy necessary to understand even the slightest its manifestations: the criticism behind the back, lying, insincere smile.

In the sculpture “Children-victims of adult vices» in Moscow, the Theft shown by the author in the form of the ugly and cunning pigs, which brandishes his filthy fingers, holding the stolen money. Behind this development are the Bank details and bag signed word “offshore”. In modern life this defect is manifested not only in what people give and take bribes, but in the fact that for many the goal of life becomes the accumulation of wealth and luxurious things start to mean more than human feelings. A small child on their own all this interpretirovat, sees a picture in a different light and therefore false picture of the world for real. 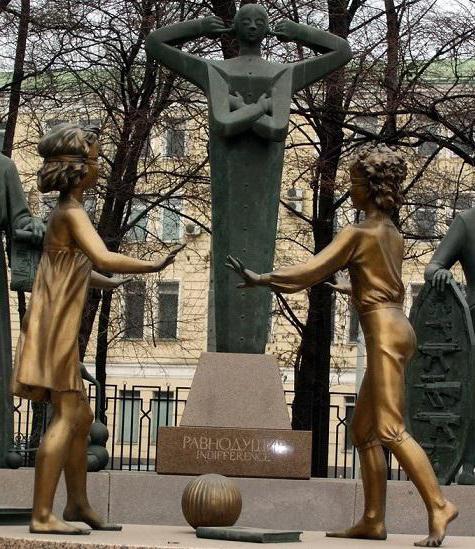 The monument «Children-victims of adult vices" alcoholism is portrayed in a mythical God, who with a smug expression on his face sits on the barrel. This ugly man with a big belly and a second chin.

The Ignorance shown in the image of the carefree silly donkey, holding in one hand a clock, and another – rattle. This is an allegorical way what fun favors all the time, not the hour.

The Image of Pseudoscience couched in a nun's habit. He holds in his hands a scroll with supposedly useful knowledge, but the creature's eye closed, and it itself does not know what they do. We are talking about the fact that some knowledge is harmful to humanity as a whole. This production of dangerous weapons, and genetic engineering, and the attempt to clone people, etc. to emphasize this, near the figure depicts a mutated dog with two heads, which Pseudoscience runs like a puppet. To show the horror of pseudoscience Mikhail Shemyakin offers to remember a story that happened in America. Popular sedative drugs, which is was at every step, was the fact that women have babies born without arms and legs. 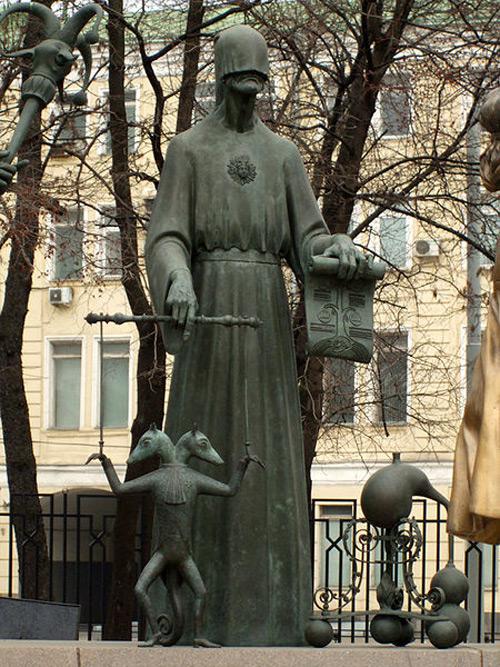 This image is very similar to the droid from “Star wars”. Represents the angel of death. The image of the war is in the form of a hawk wearing a gas mask. He is in armor and carrying his bomb sewn into Mickey mouse. It shamelessly offers children.

The monument «Children-victims of adult vices” the way Poverty is presented in the form of an old woman, which stands leaning on a staff. She is barefoot and very skinny. Despite the almost complete impotence, she pulls his hand, begging for alms. Here between people, any debate about whether poverty is evil. Someone remembered Ostrovsky's play, and someone the words of Dostoevsky. We are talking about what living in poverty. It is possible and to maintain their dignity, not the name of the extra piece of bread. But in poverty, all are equal, and we can't stay here special. But the one to blame for the poor are the others, definitely deserves condemnation.

The Exploitation of child labor, and Unconscious Sadism

Exploitation of child labour the architect presented in the form of a bird with a huge beak. She invites the beholder to follow her into the factory, where on each wall impressions of children's handprints. In a more simple sense, refers to a meager childhood, conventionalism in the most beautiful time in life the manipulation of the sense of duty.

The Unconscious depicted in the form of pillory, on which snakes crawl. This means a complete insensitivity to what happened in the past, to memory, consideration. Insensitive post enveloped the snake's consciousness blurred.

Sadism is shown in the terrible image of a rhinoceros, which looks at the man with open arms. Not sensitive to pain and feelings of others, he the rope maintains its huge saggy belly. In an allegorical sense is the desire of adults to exercise their power over children, to teach them according to their own beliefs, even false. Many seek to dominate and suppress the children, thus spilling out of their complexes. 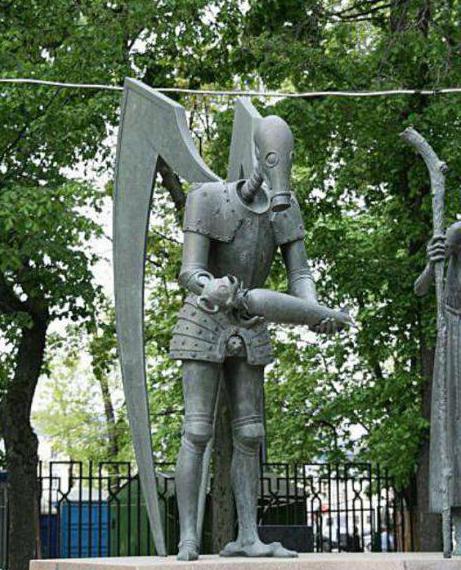 Violence is portrayed in the form of Pinocchio, which offers a lot of money for the injury. By the way, today's violence is more often seen in games, cartoons and children's films.

Over all these monsters is the main of them – Indifference. This is the worst of vices, because from him derive all the rest. This creation from the unconscious body, closed eyes and plugged ears. It is the insensitivity and unwillingness to understand each other are the root of many ills. Monument "Children - victims of adult vices" carries the promise that if by doing evil, the man changed his mind at least 10 minutes, many unfortunate events could have been avoided. After all, we all know how “off” your inner voice and silently to do what you want, even if it might hurt someone else.

Commercialism. What kind of quality and what is its benefit?

Gaining some life experience and reading literature, especially classic, any intelligent person will sooner or later understand that most of the people living on our planet, loves two things: material wealth and idleness. Money gi...

Positive quotes that will fill with optimism every day

a Feature of modern life are constant stress. He is forced to experience them both at work and at home. Even a trip to the store can result in the loss of mood. Not to mention the fact that often people are putting pressure on you...

Mechanisms and consequences of globalization

Globalization is not a process that unfolded in the last hundred or two hundred years. It started back when in the ancient world first met the representatives of different cultures. The campaigns of Alexander of Macedon, the expan...

What is the PAP, and whether it provides protection from unwanted pregnancy?

many of us Probably heard about the acronym PAP, but its value is not known to all. What is PPA? This is coitus interruptus. This abbreviation is widely distributed in gynecology, because science will take coitus interruptus to on...

Fauna: what is this term?

we've All heard the term "fauna". What is this concept? We'll see details.Definitionso, fauna... What is this term? Big explanatory dictionary of modern Russian language by D. N. Ushakova argues that this fauna, all the species of...

Alexander Nevzorov: biography and personal life of a journalist

Director, video blogger, reporter and broadcaster, writer and journalist, presenter of television and the Deputy of the state Duma, the participant of military conflict and scientist apolog, politician and novice in the monastery....