The great Martyr Theodore Stratelates — this is one of the saints recognized by all Christian churches. He's long been revered in Russia, as evidenced by the ancient temples, in the name of this Saint. These include the Church of Theodore Stratelates on the brook. It is considered one of the most beautiful examples of medieval Novgorod architecture and served as a source of inspiration for many Russian architects for nearly 7 centuries.

So who was Theodore Stratelates? To know the details of his life will help this article. 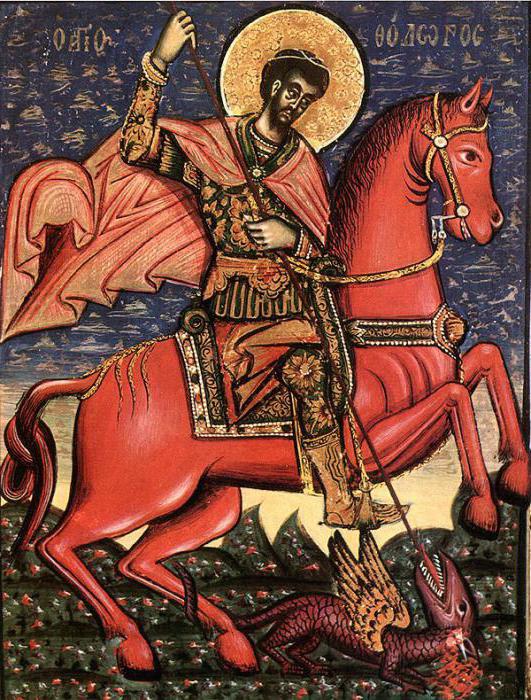 According to the tradition of the Orthodox Church of Theodore Stratelates was born in Asia Minor in the city of Euchantum. He was a brave, beautiful young men, professing Christianity. At a very young age he entered the service in the Roman army. In the reign of the Emperor Licinius launched a brutal persecution of Christians. However, the Romans saw that those who believed in the Savior, happy to be martyred for the faith. Then the Gentiles began to persecute Christians holding public office and enjoying the respect of the people. With this purpose were killed Forty martyrs of Sebaste, and several other important dignitaries from the environment Licinius.

Theodore Stratelates was honored among fellow citizens after he killed the snake that lived to the North of his native city of Euchantum. According to legend, is a bloodthirsty monster hiding in the failure of the sown field. Times a day it got to the surface, attacked livestock and humans, and satiated, he returned to his lair.

Theodore decided to save the inhabitants of Euchantum from this scourge. On the way to the shelter of the beast he lay down to rest. He was soon awakened by an old Christian Eusebius, in the hut which housed the relics of St. Theodore of Tyrone, and gave advice on how to defeat the monster. The future Martyr prayed and asked his horse to help him in the name of Christ. He sat on his horse and galloped to the field, caused the snake to a fight. After the monster crawled out from his lair, the knight Theodore jumped on his back and the rider with the help of God was able to hit the beast with a spear.

When the inhabitants of Euchantum saw the body of a defeated snake, they tied this feat Theodore with his faith in Jesus Christ and many have decided to reject the pagan gods. 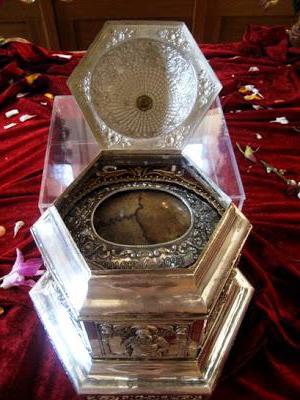 After his rescue from the monster Euchantum Theodore was appointed Stratelates (commander) in the city of Heraclea. There he began to openly preach Christianity and succeeded in this matter. Soon the Emperor Licinius was informed that most of the inhabitants of Heraclea and its surroundings converts to the new faith. He sent to the great dignitaries, which was to lead Theodore to Rome. However, the future Martyr himself invited the Emperor to Heraclea. He promised him to make a significant sacrifice to the pagan gods to prove his loyalty to Rome and to the Emperor, and also to serve as an example for the people.

After the letter was sent, Fedor began day and night to pray, until one day he was lit with an unearthly light, and heard a voice from heaven, which said: “Go for it! With thee I!”. 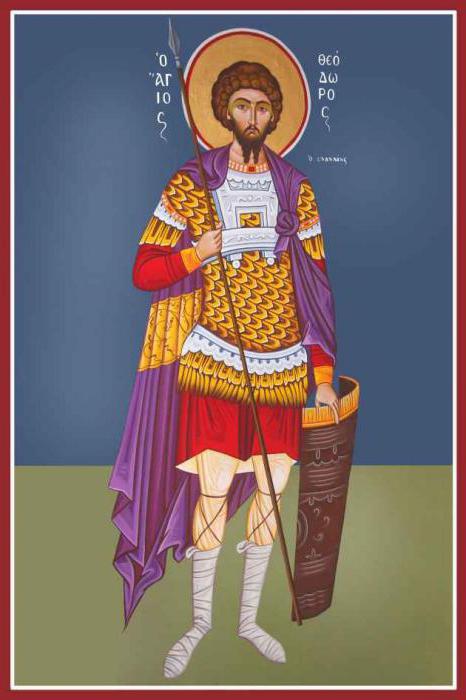 Soon, the Heraclea arrived the Emperor and 8,000 Roman Legionnaires, who brought several dozen gold and silver statues of the pagan gods. Theodore Stratelates (photo of a Greek icon with his image, see below) asked Licinia's permission to place idols in his home, allegedly to he had the opportunity to give them praise. When the Emperor agreed, Stratelates smashed statues and distributed the fragments of gold and silver statues to the poor.

In the Morning the centurion Maxence noticed the poor. He was carrying the head of the Golden statue of Venus. Then Maxentius told to grab him and learned from a beggar that he gave Theodore Stratelates. About this unheard of from the point of view of the Romans blasphemy Maxentius immediately reported to the Emperor. Summoned for questioning the great Martyr confessed his faith in Christ and began to Licinia prove that he is wrong, worshipping idols. In particular, he asked the Emperor why the mighty gods of Rome did not burn him as a heavenly fire, when he desecrated their images. Licinius was outraged and, as could not object to the arguments of his Stratelates, commanded to expose Fedor to torture. It whipped the fire burned, imprisoned, starved, blinded, and crucified.

Deciding that Fyodor died, Licinius ordered to leave him on the cross, but at night an angel of the Lord freed him and healed wounds. Seeing this miracle, the inhabitants of Heraclea had believed in Christ and decided to show disobedience, demanding to stop prosecution of his Stratelates.

Martyr did not allow them to shed blood. He was released from prison, prisoners who are ordered to live according to the precepts of the Lord, and healed the sick who came to him. Then, giving the last orders, he went to a voluntary penalty. 8 February 319 by the order of Licinius, he was beheaded his head, and his body was brought and buried in his hometown Fedora — the Euchantum, in the name of the parents of the Martyr. 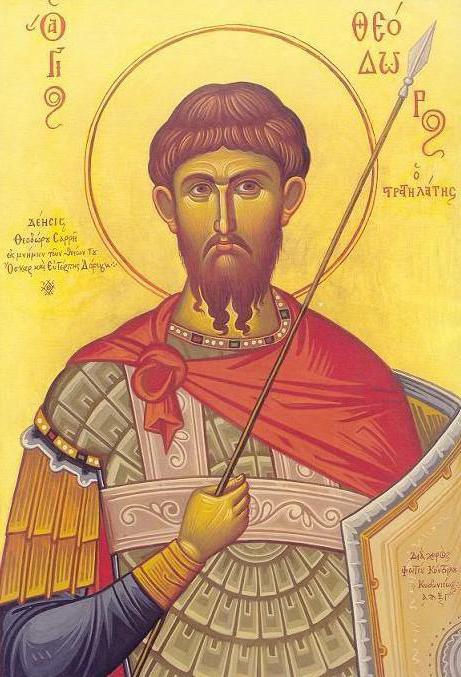 After the death and burial of the Saint began to help the Christians and to punish their enemies in different corners of the earth.

So, according to the Patriarch of Antioch and John of Damascus, who lived in the 7th and 8th centuries, the capture of Syria by the Saracens the Church of Theodore, located near Damascus, was subjected to desecration. He was ruined and became used as a dwelling. Once one of the Saracens shot an arrow into the image Stratelates. They emitted the arrow hit the shoulder of the Saint and the wall started to bleed. The Saracens and their families, who lived in the building, still not left the temple. However, after some time they all died. The causes of the disease afflicting infidels, remained unclear, and all who live in the neighborhood, the disease has spared.

Another miracle happened during the last battles of the war 970-971 between Russians and Byzantines. According to the "chronicle" of Saint Theodore Stratelates helped the Greeks to hold back the army of Svyatoslav Igorevich, with significant numerical superiority of the Russians.

Day of Theodore Stratelates celebrated the Orthodox Church on the Julian calendar 8 February and 8 June, and Catholic — 7 Feb. Since 2010, with the blessing of Patriarch Kirill the great Martyr is the patron Saint of the Federal Service of Court Bailiffs of the Russian Federation. 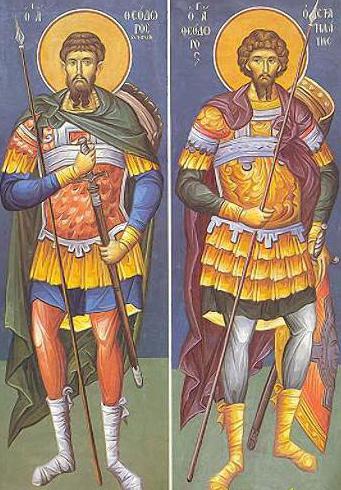 There are many icons, which depicted two soldiers in armor. This is Theodore Stratelates and his namesake surnamed Tyro. According to legend, two warriors were born in the same Roman province. Theodore of tyre was a warrior marmaritanskogo regiment, quartered in the city of Amasea. He refused to obey his centurion, Brinco and did not participate in the public worship of idols. For this he was brutally tortured and then burned at the stake. However, the remains of the Martyr were not damaged by the fire, and buried them in his house the Christian Eusebius.

The Life of the two saints are closely intertwined with each other, and they are often depicted together. This is due to the fact that in the period of the Byzantine Empire, these martyrs represented the beginning of a Christian in the military power of the state. Both Feodorov was also associated with George, probably from a similar story, with the victory over the serpent. 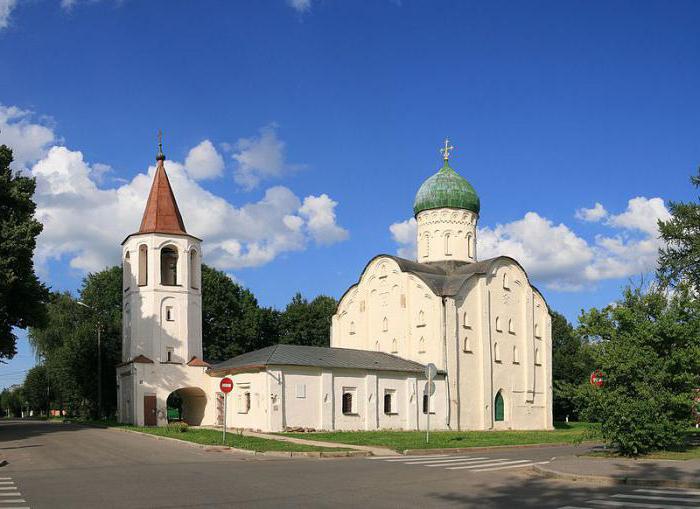 Church of St. Theodore Stratelates on the Brook

In honor of this Saint was consecrated a Church in different parts of the world. Among them special place is the temple on the Creek, which is located in Velikiy Novgorod. It was founded in 1360, for a donation Novgorod mayor Semyon Andreyevich, and his mother, Natalia.

The Church of St. Theodore Stratelates — this is a classic monument of medieval Novgorod architecture. The building is a domed building in the form of a cube, whose facade, especially the apse and the reels are adorned with various decorative elements. The Western side of the temple adjacent to the bell tower and an Annex, built in the 17th century. Address of building: street Fedorovskiy Creek, d. 19.

The Temple is interesting because on its walls you can read the medieval “graffiti” including humorous content left Novgorod, about 700 years ago. Today the Church functions as a Museum and it is included in many tour programs.

The Church of St. Theodore Stratelates is in the capital. The temple dedicated to this Saint is located walk from the Clean ponds in Archangel alley and it was built in 1806. 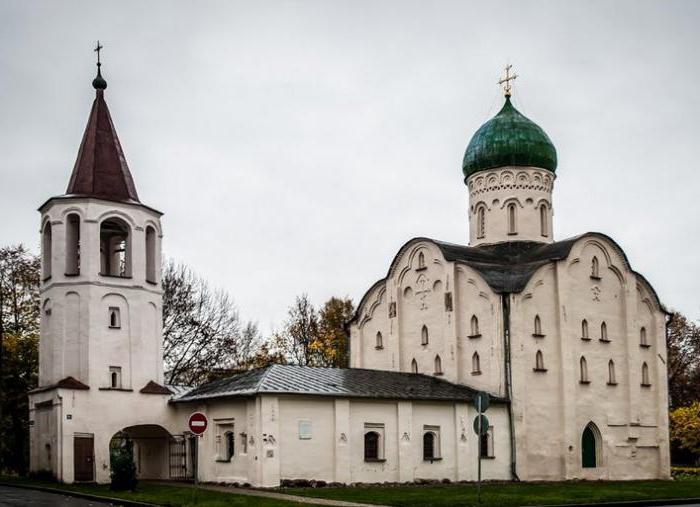 In the Crimea and still has a monastery of St. Theodore Stratelates, who is considered one of the oldest on the Peninsula. It was founded by the iconodules in the 8th and 9th century and lasted till 1475, while the Principality of Theodoro was not conquered by the Ottoman Empire. In the monastery lived 15-20 people. All there are 22 caves of different purposes, including use as cells. There is a large refectory hall.

The revival of the monastery, which belongs to the RIC began in 2000.

Who ^ Lev? This writer, author of works of art, in which there are such words: “there is a strong storm, I'm afraid, as if not to drown". The trouble is that none of the library to find the works of art. Even the most e...

the Role of nature in human life cannot be overestimated: it is both material and spiritual significance. Many people do not even think about the fact that their home – it is a pure ecological system: mother nature gives man...