How to draw a pig beautiful, and most importantly, believable.

How to draw a pig beautiful, and most importantly - believable? It is quite simple and even an inexperienced artist, as the animal has a simple form of the body in the form of a solid cylinder, it even has no neck. The head, legs and tail to portray is also very easy. So let's step by step learn how to draw a pig.

Pig in a standing position 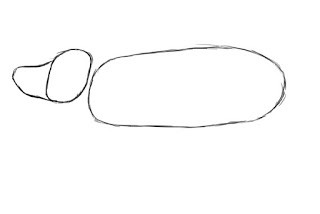 Step 1. Draw a large elongated horizontal oval. It will be the body for your pig. Next to the large horizontal oval (body), draw a small vertical oval so that it does not touch the core. This smaller oval size should be about 1/5 the size of the body. In application to the smaller oval need to draw a triangle. This will be the snout of a pig. To know how to draw a pig right from the start, look carefully at figure 1. The sample flowing lines connect the 2 oval - body, and head of future pigs. 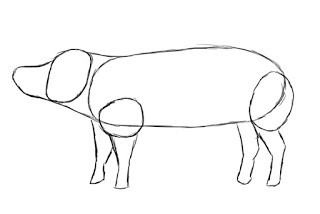 Step 2. Smooth contours connect the top and bottom of the finished torso.

Now dorisovyvaet lower limbs. Let's start with the front legs. Draw a circle around the front of the large oval so that a large part of the round came on the body. Below the circle, draw a quadrilateral, narrowed in the middle. It resembles a child's drawing of a tree (crown and stem). To draw the rear legs, you have, in fact, to repeat the same action: to draw a circle as shown in figure 2, to finish quadrilaterals, narrower in the middle. They will represent the rear legs. The only difference is that the back legs thicker than the front, also the back legs need to bend back around the middle (where the pig is the knee joint).

Give the picture naturalism 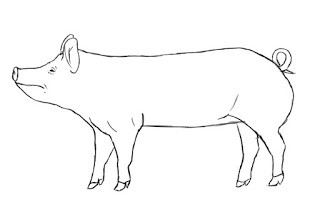 Step 3. First steps demonstrated how to draw a pig with a pencil in stages. Having the basic contours, you must give the picture credibility. To begin with the eraser tool gently remove all unnecessary lines in the figure. At the top of the head add a pair of vertical lugs, rear add a twisted tail. At the bottom of each leg add a small trapezoid, which will serve as the hooves of pigs.

The last figure it is seen that a slightly modified form of the head - the stigma slightly enlarged. The figure is almost finished. Now, in front of ear it is necessary to add a point to the eye of the pig, little to paint the snout-the snout and below, slightly curved downward, to indicate the mouth. The line of the belly, front legs and shoulder blades of the pig short strokes to build muscle under the skin. Done!

Pig in an inclined position

How to draw a pig any different? For example, eating? It is also very simple. The algorithm we use is the same as in the previous option. 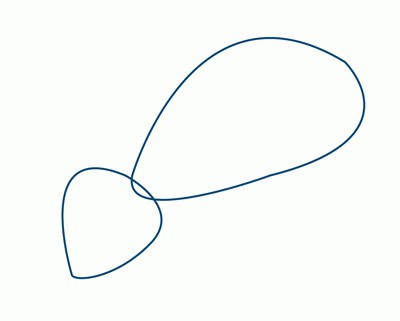 Step 1. Again, use basic shapes - oval and round. But in this case, a large oval expandable saivam behind and slightly ahead (in the form of large drops). So do with the shape of the head - the occipital rounded, and the front draw (yield drop). Here already finished the outlines of the animal. 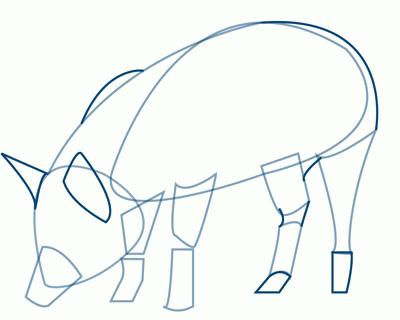 Step 2. A smooth curved line to connect the torso with the head. Complete front and rear legs as a pair of irregular quadrilaterals, as shown in the figure. Triangles indicate ears from the top of the head, slightly receded from the edges of the circle. The front muzzle line indicate the future of the snout. 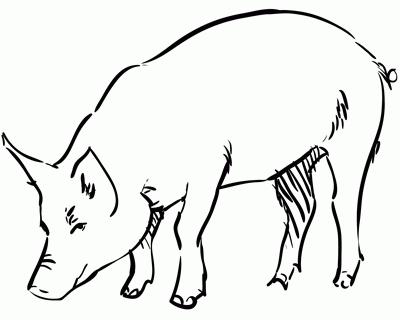 Step 3. Now we need to finish the drawing. For this eraser to remove all the excess lines. Smooth out all the contours. On the face porisuem eyes. They have pigs, very small, slightly almond shaped, located just in front of the ears. The short stroke let the mouth as shown. Back porisuem curled up tail. Optional short lines will Prorsum muscles and let the folds of skin on a pig's body.

If your figure is similar to the original, now you know how to draw a pig with a pencil. If something did not work the first time, do not worry and try again!

How to draw a pig even easier

The Proposed method works even for kids. The main element of the picture - circle. To begin with the sketch. Draw 2 circles - a big for body and small for the head. And the little circle is supposed to be like the flat top and bottom. Circles place so that little bit went on the big one.

Now in a small circle - head - add details such as eyes and the nose. They are displayed in the form of circles. The eyes draw small dots close together to each other, nose - in the form of an oblong oval right beneath the eyes. On the nose-stigma add 2 vertical lines-the nostrils to the plausibility of the figure.

At the Top of the head triangles fill in the detail on the lugs. Inside each ear add one more little triangles. At the bottom of the torso rectangles add legs. Small lines draw the hooves.

Now you have learned how to draw a pig cartoon. To your masterpiece to give a finished look, the pig can be painted.

Lily Collins was born in the family of a famous rock musician Phil Collins. In early childhood, started acting in TV programs. The school girl was fond of journalism, wrote articles for many teenage magazines.Start an acting caree...

Folk tale is a good way of understanding the world child

Every mother tends to her baby to spend time not only interesting but also useful. That's why our grandmothers read to us in childhood a fascinating tale. The years have passed, but these entertaining stories have not lost their r...