Double-Decker train "Moscow-Adler": passengers ' reviews, photos and prices. What are the reviews of the new two-story train 104 "Moscow-Adler"?

1 Nov 2012 for the first time, went double-Decker train №104 "Moscow-Adler". This structure existed before. However, the decision of the Railways cars it was replaced by a fundamentally new one. What was different about the trip on the train from traveling to normal, and what are the feedback of the passengers?

Double-Decker train "Moscow-Adler" (which reviews are somewhat contradictory) departs from the Kazan station at 10 am. Some dissatisfaction of passengers is causing the lack of time of its stay on the platform. The train is only 3 minutes. For a comfortable fit this, of course, is not enough. Stopover also pretty short (5-15 min). That is to go to the station shop to buy mineral water will not work. 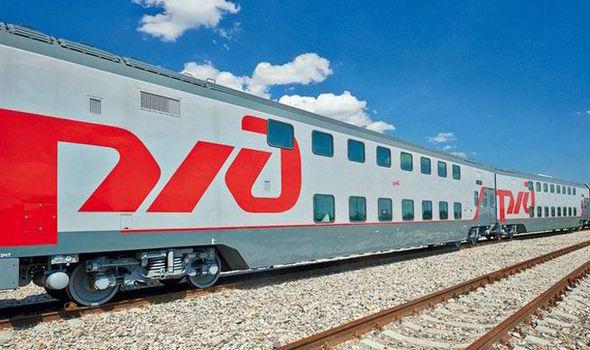 Smokers no facilities are provides train "Moscow-Adler" 104. Stop – the only way to enjoy a cigarette. Smoking in trains of distant following for some time now banned, and the developers of cars is taken into account. In some lobbies, and adventurous passengers still scratched hole under the ashtray, but, you may not get lucky.

Enjoy the scenery on this train will not always. From the top shelf, because of its location, it is impossible. Lean towards the window in order to see and have in the hallway of the second floor of the car. Observe flashing by the beauty of the comfortable only with lower shelves and chairs of the restaurant. 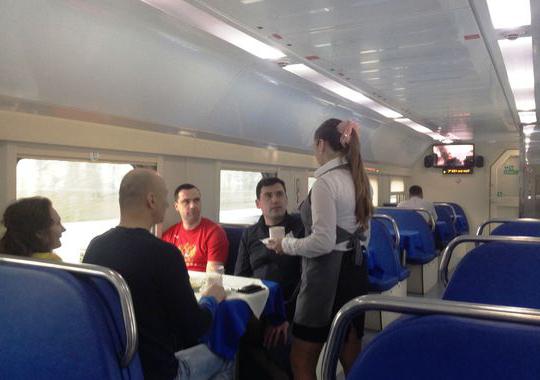 Sleeping shelf in the train are exactly the same as usual. That is two top and bottom. Difference – in the absence of the top shelf meant for Luggage. Bags and suitcases will have to put in the hopper under the lower bunks.

Another feature of the coupe's double-Decker trains is a very small distance from top shelf to ceiling. To sit on it will not work. You can only lie, and that many of the passengers complain of an inconvenience in this case. Short people will feel more or less bearable. Fat, people high on the top shelf because of the lack of space will surely experience some discomfort. Especially on the second floor of the train, where the ceiling is slightly sloping. Distress – the main reason that the reviews about the double-Decker train 104 is not always flattering. 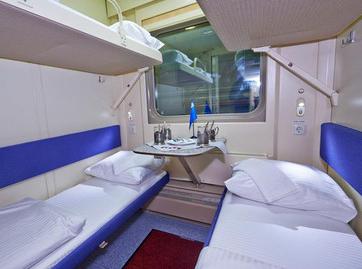 Second-class carriages in this part no. Only a compartment and SV. Still, the capacity of this train has a much greater than normal. Therefore. double-Decker trains at a cost comparable with a ticket for the reserved seat of ordinary.

Double-Decker train "Moscow-Adler", which reviews the passengers are often not very flattering, stated, however, the management of Russian Railways as a part of the premium. Indeed, provided much more than usual. For example, each compartment has two outlets (on the wall at the bottom shelves). However, to include only devices that require voltages of up to 100 watts (the laptop consumes 10-15 watts). Available in cars and Wi-Fi provided by the company «MegaFon». It can be absolutely free of charge. 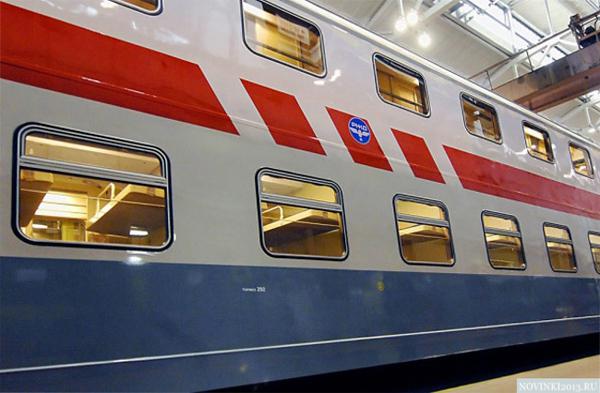 Unlike conventional cars to double-Decker train is:

In the maintenance of the double-Decker train "Moscow-Adler" (which reviews are in this respect good) does not differ from the usual. As part of this signature, the ticket price includes bed linen and a set of traveler (pate, biscuits etc). Of course, if you want you can order tea or get water from the kettle. The restaurant in the car – on the second floor. The first is a small bar.

The Windows in the cars of double-deck trains do not open. So a fast ride will not work. However, to suffer from the heat also don't have to. In cars provided by the ventilation system. Heating, of course, available. Toilets in each carriage, not two as in normal, and three. There is also a compartment for the disabled and a video surveillance system.

In this article, you can see what it looks like double-Decker train "Moscow-Adler" (photo). 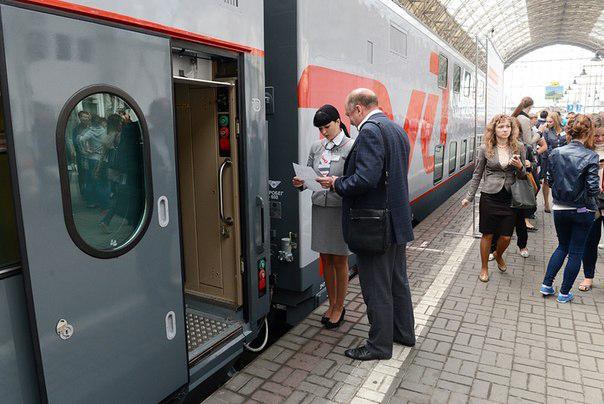 The opinions of travelers

The Negative reviews about this composition in fact many. But this should not be surprising. After all, people in this train much more than usual, and each passenger – due to the design of cars – less. Little in this train not only the coupe but also the corridors. High passengers and they do not feel too comfortable. Uncomfortable to move and very narrow stairs leading to the second floor. Especially with suitcases. If the normal trains on big stops queues formed in the two-story is just pandemonium. Considering the Parking, any comfort, in this case, can not speak.

Wi-Fi on the train is available, but working intermittently, and sometimes not functioning. Not too speak well of the passengers and the toilets. They work properly and are not close to the stops. But since Smoking in cars is forbidden, many of the passengers slowly smoke it in the toilets. That, of course, inconvenience to other travelers. In addition, to visiting the toilet often have to stand in a big queue. Some passengers also complain and not work ventilation. Sometimes in cars, sometimes stuffy. 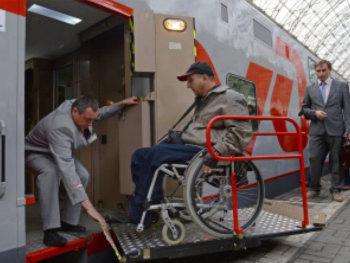 Regarding the prices to train 104 "Moscow-Adler" reviews some of the passengers are also not too flattering. Many believe that the fare is somewhat overstated. Feature composition is not bad, but be it due to lack of free space is not especially comfortable.

The Cost of the travel document in double-Decker train "Moscow-Adler" (the reviews of which, as you can see, not always good) is about 3500 rubles. This amount will be valid only if tickets are booked in advance (a month before departure). Prices for seats in double-Decker train dynamic. The more filled the car, the greater the cost of the travel document. The day before sending the ticket price can reach 8,000 rubles. For the bottom shelf you will have to pay more than the top.

Above indicates the cost of the ticket from Moscow to Adler. Passengers to intermediate stations fares will be cheaper. The train passes 104 "Moscow-Adler" through major cities such as Voronezh, Ryazan, Rostov-on-don, Krasnodar, Tuapse, Sochi.

Where you can buy tickets

A document on a double-Decker train, you can book in the usual way at the box office, Railways stations, in points of the company «the Messenger" or on the website of Russian Railways. Have the opportunity to purchase tickets and customers of some online banks. For example, «Sberbank» and «Alfa Bank».

The numbering of the seats in carriages double-Decker trains traditional: odd shelf – at the bottom, even – at the top. So in this respect, no confusion can not arise. The shelves on the second floor starts with 81 rooms (on 112). From Moscow to Adler's composition gets in 24 hours. 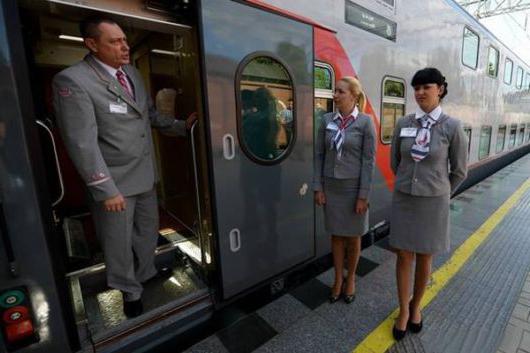 So you've decided to buy tickets for double-Decker train "Moscow-Adler". Prices on it are still more or less democratic. However, the journey itself because of the closeness may not be particularly comfortable. How to make him more comfortable? For this, first, take your own food and drinks all the way. Second, tune to smoke at bus stops. In the toilet it is better not to do. Think of the children. Elderly people should not buy tickets on the second floor. To climb and descend the steep stairs, despite the presence of grab bars, they will be pretty hard.

Think, perhaps, overpay 500 rubles, but to go more or less conveniently on the bottom shelf. Bring a laptop or netbook. Nearby settlements WiFi in the double-Decker train catches almost always. Consequently, the Internet can help to brighten up a little not too comfortable journey. And, of course, buy your tickets in advance. This will greatly save money on travel.

JSC "Aeroflot" (member of Sky Team) is a major Russian aircraft Corporation, "under the wing" which also has three subsidiaries - "Victory", "Russia", "Aurora". Works on international and domestic flights from Sheremetyevo airport...

the Entire Russian railway network is divided into 16 branches. Each of them has a subordinate section of the path, control system. One of these branches is the Transbaikalian railway, on which we want to elaborate.General charact...

Speaking about the hotel Adelina Hotels 4*, which just recently was renamed to Club Eva Hotel, which is connected with the change of the owner, is first to tell about the resort, where this hotel is located.TurklerTurkler (or Turk...

In the heart of Eurasia, in the South of the Republic of Kazakhstan the city of Almaty. "southern capital" of Kazakhstan is famous for its hospitality and originality. The city is open to all travellers – Almaty is...