Who of true football fans don't know the name of Igor Belanova? Great player, winner of the Golden ball, still a lot of good to say about this man. But let's take first things first. 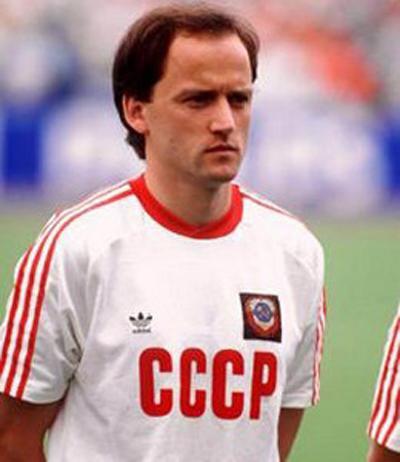 Famous football player was born on 25 Sep 1960 in Odessa. Spent a lot of time in the yards, playing with the guys. After trying to go to school Odessa «Chernomorets» received a waiver in connection with small growth. However, he didn't quit the hobby and played for the team, local housing office, where I got to take the main football club of Odessa. In parallel, he graduated from vocational school and had worked at a local construction site.

When he turned 18, began to serve in the SKA "Odessa". Matches in the second League gave him confidence in his abilities, so that in 1981 he was able to break into the first team «Chernomorets». On the football field Belanov differed that much and just hit the ball. With high-speed qualities, he, along with the ball went in a breakaway from defenders to meet the ball.

In 1983, his playing was noticed by the coaches of the Olympic team of the USSR. This team Belanov played 2 matches at the official level and the same number in friendly matches. In the asset footballer - one goal. 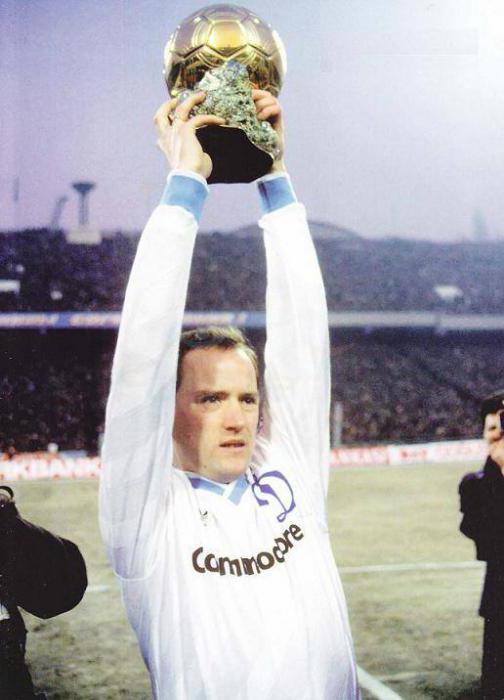 In 1985, Igor Belanov changed Odessa to Kiev, having the transition to the "Dynamo". In this club, the player has fully revealed his talent. The chief coach of the national team of the USSR Eduard Malofeyev invited him to play against the Danes. However, the first pancake for Belanova turned out lumpy: the team was defeated with a score of 2-4, and he received negative feedback from the coach. Subsequently, Igor has not been involved in matches for the national team until it was headed by Valery Lobanovsky.

Recognition in matches for the national team

At the world championship 1986 in Mexico Belanov was listed as a first-team player of the USSR national team and at 100% lived up to its expectations. In all its glory, the footballer revealed himself in the match against the Belgians at the stage of 1/8 finals, despite the final defeat. The main time the winner is not revealed – 2-2, and in overtime the team of Lobanovsky lost 3-4. Scored in the game Igor Belanov. Goals in this dramatic duel for his national team he scored it. After the unfortunate fight in the Union cause loss believed referee Eric Fredrickson, who made a lot of mistakes. 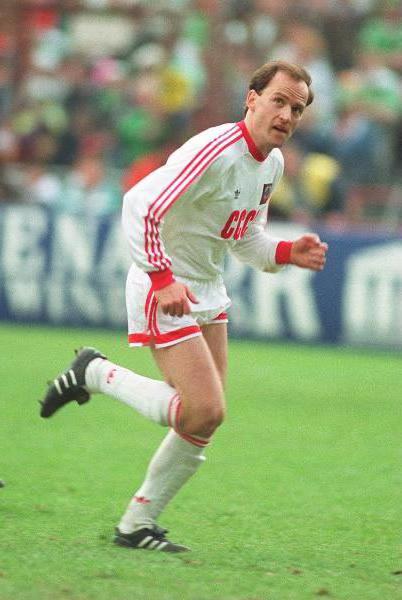 The Beautiful game of football at the world championship in Mexico and the successful performance of it in Kiev «Dynamo», and in 1986 joined your club a collection of Cup winners ' Cup, and has received universal recognition. According to the magazine "France Football" of Belanova considered the best player of Europe of 1986. It is with great separation from the nearest competitor was the winner in the survey, earning 86 points. Opponents of Ukrainian players were Gary Lineker and Emilio butragueño, who scored 62 and 59 points respectively. 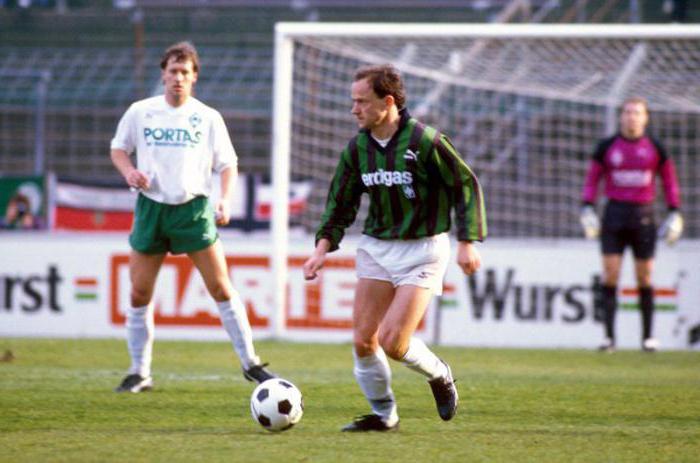 The award «Golden ball» football player of Kiev «Dynamo» received 18 March 1987, before the match with Turkish “the mayor" within the ¼ finals of the European Champions Cup. As noted subsequently Belanov, from the rush of emotions he was alarmed and could not find the net. 4 minutes before the end of regular time of the match, the player had the ability to score from the penalty spot, but sent the ball over the crossbar. Thus Belanov first scored from the penalty spot.

Another annoying case of football happened in the final match of the European championship 1998 in Germany, when the USSR national team faced a team of the Netherlands. During the match the representatives of the Netherlands won 2-0. Belanov 60 minutes had the opportunity to revive the intrigue in the match. However, put the ball from the penalty spot on his way he found a Shoe goalkeeper. 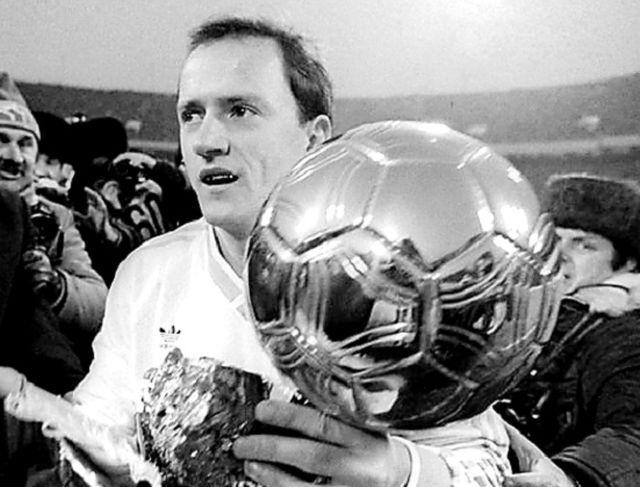 In 1989 Belanov Igor Sechin signed a contract with the «Borussia» mönchengladbach. Successful start, when he managed to head the list of scorers and effectively to hit the target “Bayer”, soon gave way to a succession of injuries and conflicts with coaches. The player could not fully Express themselves in the German League for a number of reasons.

Greatly tarnished the reputation Belanova scandal buddies and his wife who was caught stealing in the store. The German media has greatly misrepresented the situation and was trying to blacken the name of the player. Belanov on the advice of a football player Lothar Matthaus did not sue the journalists. The place in the first team was lost due to the conflict situation with the head coach. Then the club decided to sell the player in “VfL” of Braunschweig in 1991. In his new club Belanov was delayed until 1994, having distinguished himself at the gate of an opponent 21 times in 67 games. 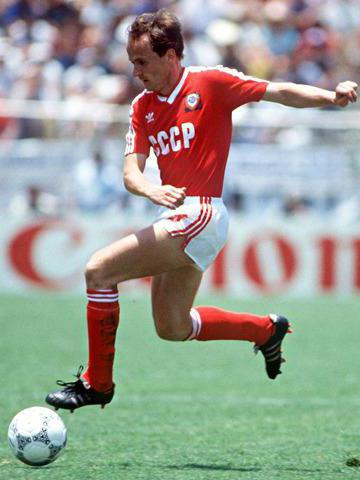 After the speeches abroad Belanov came to Ukraine and played in the championship of Odessa region. Then moved to Odessa «Chernomorets», but after three matches played wereinjured and no longer able to rescue the team before the end of the season. Then went to Mariupol «metallurg», where he played 5 matches and has made the decision to finish career of the player. In the hometown of a football player in 2012 was a memorial star in his honor.

Igor Belanov - a footballer with a capital letter. He often takes the "Golden ball" with him to show to his athletes. According to him, this will motivate the children more intensively to play football. Nothing is impossible, so you need to set a goal and pursue it faithfully, emphasizes Belanov by example.

due To various circumstances, a person has to live in uncomfortable conditions. Some of these are: geological exploration, archaeological sites, naturalistic studies and active rest on the nature. Gas burner for a hike in such con...

the sports World is cruel: it is champion to finish his career, as well as in its place come the young guys, and about the former leader almost immediately forget. However, there are personalities whose name in history is literall...

a Primary goal in the melee when the need to quickly eliminate the attacker act as the eyes and genitals. What about hitting in the scrotum area will be discussed in this article.an unexpected Strong push in the crotch area immedi...