Bulldogs have long been famous all over the world as strong fearless dogs. Everyone knows that the birthplace of this breed is England, but modern English bulldogs have become pampered and good-natured companion dogs, little resembling those strong and muscular animals that were bred for dogfights. It was the Old English bulldog that was famous all over the world for its fearlessness and independence. Since the middle of the XIX century, these dogs have almost disappeared. 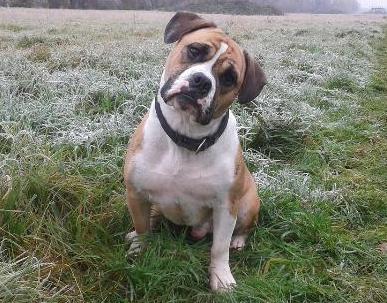 But fans of purebred breeds revived them, and now you can meet Old English bulldogs, almost indistinguishable from those fighting dogs of medieval England.

In England, such fun as bull baiting was common, when dogs attacked him and gnawed him half to death. 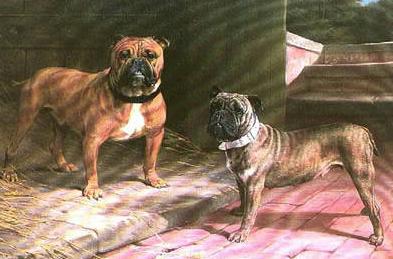 Therefore, they had to have not only strength, but also agility and fearlessness. And later dogfights became popular. Dogs of the Old English Bulldog breed were used in these cruel entertainments. Angry, strong and aggressive, they were no longer suitable for any job. Therefore, when in the middle of the XIX century all animal fights were banned, these dogs gradually disappeared. But they were used to breed new breeds. And bulldogs have spread all over the world. Breeds began to be called differently: bullmastiff, pit bull, English or American bulldog - depending on which dogs they were crossed with. But all of them almost didn't look like a real Old English bulldog anymore. Such dogs have not been seen anywhere for almost a hundred years.

Growing up, the child learns the richness and diversity of the surrounding world through games and educational activities. With the help of toys, young children learn to build relationships, experience various emotions, try to understand their own de...

The beagle is very energetic and active. He will be a great companion for a young and cheerful person. The dog will follow the owner, not knowing fatigue. The beagle is the smallest dog from the family of hounds, which in terms of performance charact...

Anniversary is a solemn holiday. An adult company is happy to celebrate such dates. However, it is necessary to prepare for them properly. For example, contests for the anniversary of a man must be remembered by all guests.A good table is not the mos...

IN the 60s of the twentieth century, American veterinarian David Levitt decided to revive this breed. But it was important for him to avoid the disadvantages that the Old English bulldog had before. Therefore, the selection work was lengthy, the selection was carried out carefully. Levitt crossed dogs that descended from this breed: English Bulldog, American bulldog, bullmastiff and pit bull. Using various combinations, he achieved that a dog appeared, as strong and energetic as before, but devoid of aggression and malice. Now this breed is very small, it is found only in America and is not officially recognized. 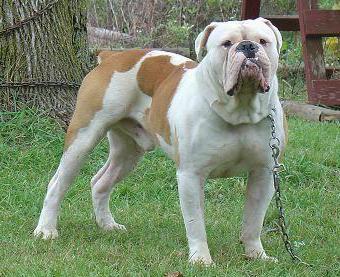 Photos of these dogs make it possible to understand how they differ from modern bulldogs. Purebred dogs of this breed should be medium-sized, they are strong and muscular. Their height at the withers does not exceed 50 centimeters, usually even less. The physique is compact and powerful, the dog is proportionally built. The head has folds, like all bulldogs, but there are not so many of them, and the skin is thick. If you compare the appearance of a modern Old English bulldog with engravings depicting scenes of hunting or bull baiting, you can see that the dog turned out exactly the same as in the past.

Despite the fact that this dog is not tall, it weighs a lot - the weight of some males reaches 50 kilograms. This is due to her strong, muscular physique. 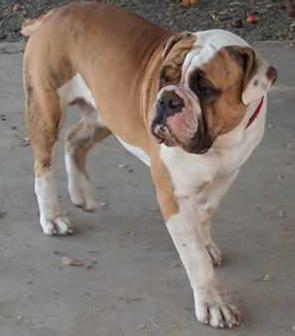 Large, almost square, the muzzle is shortened, and the transition from the forehead to the nose is sharp. There are few folds, and they are mainly concentrated on the forehead. The skin is thick and the lips are sagging. The top of the skull is flat.

Small and very thin to the touch. They are very high and wide set and curiously bent, so that even their inner part is visible.

The physique of this bulldog is very powerful and strong. The neck is thick, the chest is wide, and the front paws are therefore spaced. There are no folds on the body, the skin fits well. This dog is characterized by high-backedness.

Very short, soft and thick. The dog can be any color, but the color must be uniform. Only a black mask on the head is allowed.

The bulldog dog is already born with a short tail. It is low-set and has characteristic fractures.

Levitt managed to breed a dog that looks very similar to an ancient bulldog, but is very different from him in character. She turned out to be good-natured, intelligent and obedient. This is a very sensitive dog, it is strongly attached to the owner. In the modern Old English bulldog there is no aggression at all, he gets along well with other pets, gets along well with children and is very affectionate. If the owner is in danger of some kind, an obedient and affectionate dog turns into a formidable beast. But in general, the modern Old English bulldog was bred to be a companion, a reliable defender and a devoted friend.

But the modern bulldog dog has retained some of the features of its ancestor. Therefore, she needs discipline and serious education. Bulldogs are used to dominance, and if you don't show the dog who the owner is from puppy age, there may be big problems with her in the future. When educating, it is not necessary to use force or rudeness. After all, the Old English Bulldog is considered to be the most stubborn and intelligent dog with a sense of self-esteem. 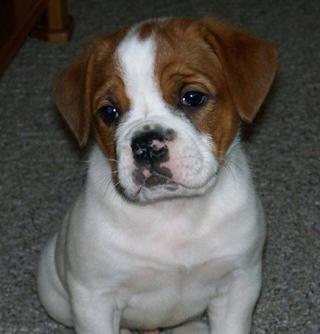 Puppies really like to chew and gnaw something, you don't need to scold them for it, you just need to provide them with enough toys. The bulldog also needs long walks and energetic outdoor games. With proper upbringing, you can get a devoted and loyal friend, always ready to bravely protect the owner from ill-wishers. But it will not work out of an Old English bulldog to make an affectionate indoor pet. This is a dog for strong, active people.

Caring for the Old English Bulldog

It is not easy to take care of the coat of this dog, because it is very soft and short. You need to clean it with a special brush. In addition, bulldogs are very cold and can catch a cold, they also need to be protected from the heat. For the health of the jaws, it is necessary to give the dog the opportunity to chew a lot, so buy her more special toys. The nutrition of pets also needs to be carefully monitored, because they are susceptible to poisoning. The Old English bulldog needs to be walked for a long time, play outdoor games with him a lot and give him different tasks so that he does not get bored. 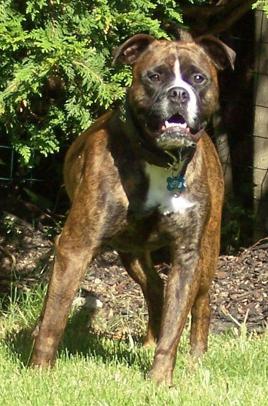 How Old English bulldogs are used

Breeds that were bred specifically for fighting disappeared by the end of the XIX century, because it was for such fun that these dogs were always used. But the bulldogs of the twentieth century were bred for another purpose: to benefit people. And they easily cope with this task. Besides the fact that this dog is an excellent companion, friend and protector of children, home guard and bodyguard, it is perfect as a partner for sports - running or cycling, as well as for use in special sports for dogs (agility, springpole, etc.). The nature of bulldogs allows you to involve them in police work in the search and capture of criminals. After all, they are fearless, strong and used to always finish what they started. And because of their high intelligence and ability to make decisions independently, they are successfully used in canister therapy - the treatment of certain diseases with the help of communication between patients and dogs.

How to get a dog of this breed

Modern Old English Bulldogs are a very rare breed. They are not recognized in Europe, therefore they are found mainly in America. But fans of purebred breeds can still buy a puppy. First you need to make sure that a bulldog will suit you. The price of this particular breed in our country is quite high - it reaches 70 thousand. But to find a puppy, you will have to try, because kennels in Russia mostly offer ordinary English bulldogs. Most often purebred puppies are brought from abroad.

Drawing lesson in the preparatory group on the topic

The older the child gets, the more demands are made on him. For example, children of the younger kindergarten groups do not have to prepare for school, but in preparatory groups children purposefully develop skills that will be us...

Bactericidal devices are just an ideal option for disinfection of indoor air. The use of emitters in kindergartens, hospitals, as well as in apartments where there are children is especially relevant. Today we will find out what q...

The American Bulldog is a temperamental dog, athletically built, strong and strong. Males have a stocky and powerful backbone, bitches have a more refined appearance. The breed is defined as working, the country of origin is the U...