In 1962, at the Gorky automobile plant GAZ-21 began to establish a new 195-horsepower V8 engine. They also were equipped with automatic transmissions. This modified car was called the GAZ-23. The order for revision made by none other than the KGB. A new car for the security services was assembled on the chassis of the GAZ-21. The weight of the new machine turned out to be 100 kg more, and up to 100 km it was accelerated for 16 seconds. The maximum speed, which was capable of this transport was more than 160 km/h. 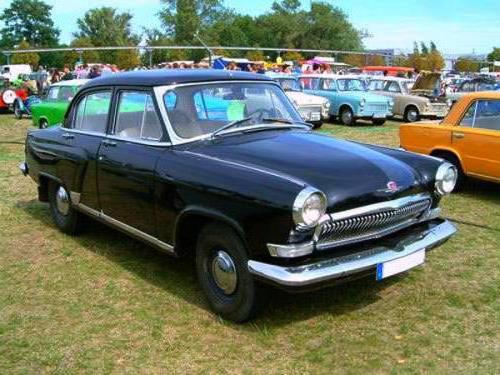 About GAZ-23 among motorists there is a lot of different legends. But you need to know the original and true story - the history of this legendary car for the needs of the special services of the USSR.

Gorky automobile plant on the order received from the Committee of state security, there was an urgent need to build a machine for special purposes. She was supposed to significantly surpass the technical equipment of the other cars, as this vehicle was supposed to ensure success in the chase. Also, the car had to give the possibility to comfortably move around in motorcades of high-ranking statesmen. In addition, the car was able to withstand a variety of other special assignments. 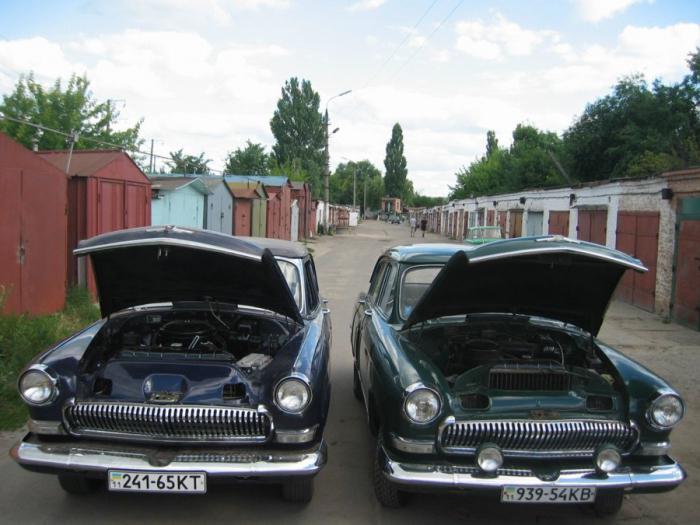 The Project was launched in 1959 and a leading specialist, who was responsible for the development and design of new machines, was appointed Boris Akimov Dekhtyar.

So, in the course of the work the designers and engineers of the automobile equipped with this modification most modern, technologically advanced and most powerful at that time, eight-cylinder engine GAZ-13. The car was already equipped with an automatic transmission.

Naturally, this engine does just like that, without modifications, could not be installed under the hood GAZ-21. So the motor was slightly modified and adapted for these purposes. In particular, installed a new oil pan was redesigned exhaust manifold and a lot of small things.

As a result of long and painstaking work of the engineers and employees of the automobile factory turned out a new engine, which was mounted on the car “Volga” the GAZ-23. In order more comfortable to install this motor in the body, engineers and designers had to deploy the motor around the axis of the crankshaft by as much as 2 degrees.

So, after all the modifications in 1962 on the conveyor got a new car, however, its production was small-scale. Designers wasn't easy. Had to do a lot of modifications. Especially much and hard I had to work on brake system. The pads that were manufactured to work in GAZ-21 standard, just could not cope with the new loads. So, engineers had to construct new brakes, which would bravely withstand exposure to high temperatures. GAZ-23 was fitted with cast brake drums from cast iron. Later, when at the Gorky automobile plant produced the GAZ-24, it will also be equipped with such brakes.

GAZ-23 produced a total of 8 years, as well as the production of these cars was small, it came off the Assembly line 603 of the car. Today these machines can be found for collectors and lovers of vintage equipment around the world. These cars cost serious money, and on the basis of their bodies, the tuning specialists create a new technologically advanced, equipped with the latest technology machines. 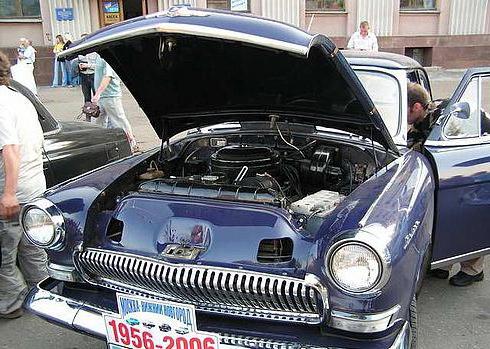 It is Alleged that there were several modifications of the machine for the KGB. This is the first and basic machine with 8-cylinder engine and an automatic transmission. It was named GAZ-M-23. There was installed an automatic planetary gearbox with torque Converter. Then there was the GAS-23B. It differed from the basic model a more pleasant style, namely an improved finish on the outside. There was a chrome lining for the Windows and weatherstrip parts and chrome left mirror. GAZ-23B was an export version of this model and was intended for replacement for the same car GAZ-21 export configuration.

Gas-23A according to the original project had to be equipped with a manual transmission, but to release it and failed. Further, the index «And» assigned to machines, which in addition to its standard configuration equipped with any special equipment.

If you become familiar with the historical facts, we can see that there was another car GAZ-21А1. Received at the plant technical specification for special purpose vehicles was a mandatory condition that there is only one pipe for the exhaust. This GAZ-23 and different from the usual, civilian “Volga”.

We Also know that managed to release several GAS-23-10 body “universal”. In 1970, the year the vehicle production for special services stopped. Many motorists still it's a shame that these machines are not sold to ordinary people. I wonder how many of these GAS-23? Photos are simply amazing, then the designers had taste. 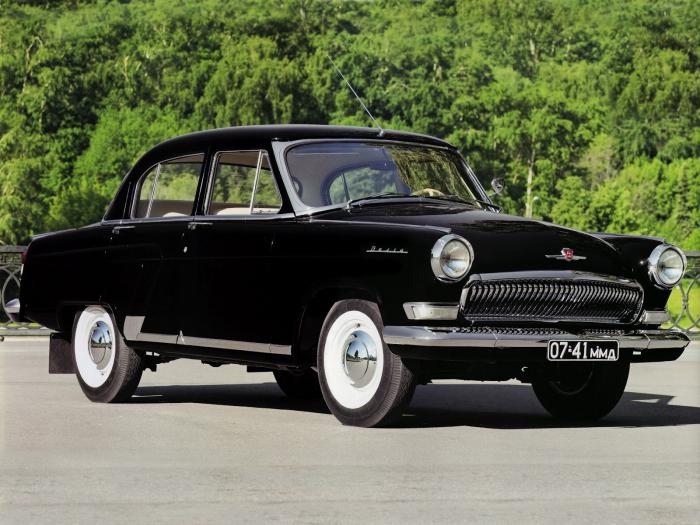 So, in the 62nd year under the hood of the GAZ-21 was equipped with the engine to 195 HP. This V8 engine, which previously was completed "Seagull", as well as automatic transmission with the planetary gear is then installed in the ‘catch-up" of car for the KGB or just the 23rd “Volga”.

GAZ-23 had an average speed of 160 km/h and up to a hundred may have gone literally over 16 seconds, which at that time was just fantastic. The brake booster in the engine compartment, the designers and engineers failed to find a place, so brake system has remained virtually unchanged. It only slightly altered by changing the disks and pads.

The Motor on the 23rd model differed slightly from the engine "Gulls". Was a modified form of Carter and his depth. Engineers also changed the length of the dipstick for checking oil level. In order that the engine could comfortably accommodate in its place, it had a little tilt. Open the hood, you can see the front shield motor completely covers the radiator.

As for the interior, it was just a luxury. This car was equipped with additional lighting, and leather sofas. There was a special searchlight.

Then there was a modification 23A with a manual transmission, which was abandoned because it could not withstand the load. In mass production went the car without any additional indexes, but with a gun.

Mounted on the GAZ-23 engine is a eight-cylinder V8 engine. The working volume was of 5.53 cubic cm and has a capacity of 195 HP the Engine was designed for gasoline A93 or under Б91 “Extra”. Also, the machine worked perfectly on the A95 and 98-m gasoline. If you look at Carter, then about halfway you can see the four studs that hold the right pillow of the engine. The exhaust manifold on the right is the same as on the GAZ-13.

In these cars, there were two exhaust tract. Each of the pipe on the right had a very interesting shape. The muffler on the right side is an ordinary muffler from the model GAZ-21. It is located in a standard location. Design left silencer unique. In fact, this is the right muffler, but in the mirror. Between the two paths of the connecting pipe there, although “the Seagull” he existed.

The checkpoint was different from that used for "Seagull". The difference in modes and management. 23rd Volga is equipped with a small lever sticking out of the gearcase. The dipstick the box serial, as in "the Seagull", but the tube it unique.

In the car 23-th model cardan transmission has an intermediate support. Set of waves differs from 21 only with the length of the intermediate shaft. On the 23rd machine the tube a bit shorter. 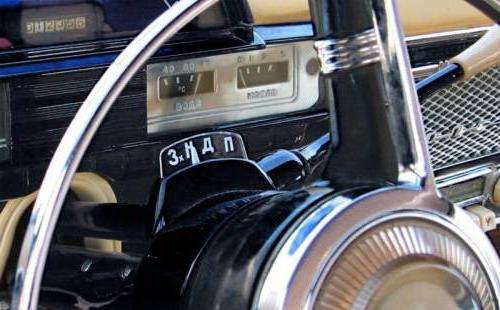 This is a common split rear axle. Many people know it design the same site on the 21st of the model. Host differentials is the same as on the 21st the model. However, the main pair has changed the ratio of teeth.

That “the Seagull” that “catch-up” the cooling is similar, but many parts are identical. Here, as elsewhere, there is a water pump, radiator, heater unit, window blinds, oil-water mechanisms.

Features of the body

The Car is designed in such a way that it was impossible to distinguish it from the 21-th model. All parts of the exterior are the same parts and/m GAS-21,23. If you open the hood, only then can you see unlike the 21st radiator cap.

Bonnet outside is no different, but with the inner side of the amplifier. Near the passenger seat there is a bulge in the legs. In this bulge is the right exhaust.

The body-there are practically no differences, but said that the trunk had an additional lock which can be opened only from the inside.

the Hyundai Sonata is a primarily bright sedan of D-class, featuring a very unusual design. Each updated version looks more dynamic and faster than the previous. New complete set supplied with engines of 2.4 and 2.0 liters. Transm...

The engine bulkhead. Tips and advice

In the modern technological world repair of various components and assemblies is becoming increasingly popular. The engine bulkhead is a complex process, which, in addition to skill, requires a good theoretical training. To quickl...

Any experienced driver is able to take care of your vehicle and can even make some simple repairs. To change the consumables, replace suspension parts and so on. The only thing which is not necessary to climb, so it is in the engi...