The battle of Borodino attracts artists not only with the scale and power of the battle scenes, but also the extraordinary dedication, and a gust of strong national unity.

At the end of the summer of 1812 Napoleon came to Moscow. The Russian army arrested the invader troops 125 miles from white stone, near the village of Borodino. Picture of the battle, described by M. Y. Lermontov in the poem known to every student, with detailed accuracy reproduces the tension and tragedy of famous battles. The author managed to show unprecedented and heroic spirit, and enthusiasm of the Russian soldiers. No wonder a lot of paintings about Borodino rely on the work of Lermontov. 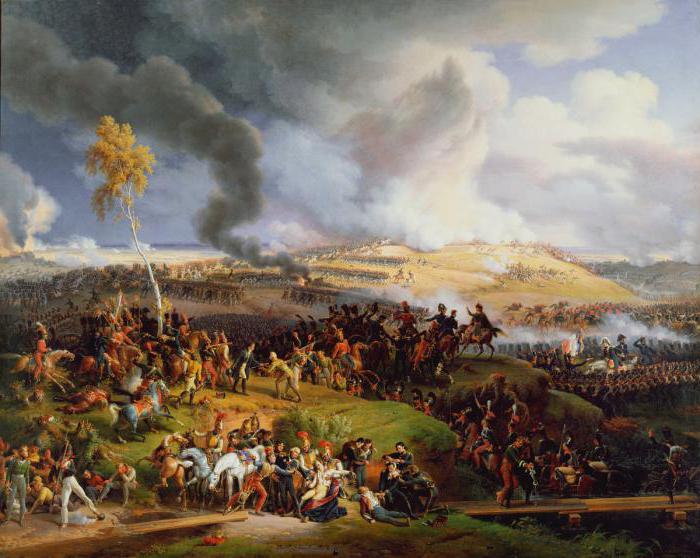 The Battle lasted 12 hours, the French managed to win on the left flank and take the position of our army in the center. After cessation of hostilities, Napoleon decided to withdraw to the starting lines. It is believed that at Borodino the Russians that day had won. Losses on both sides, however, were monstrous, so Mikhail Kutuzov ordered the Russian army to retreat with the shelves of Napoleonic France was already hurrying reserve. 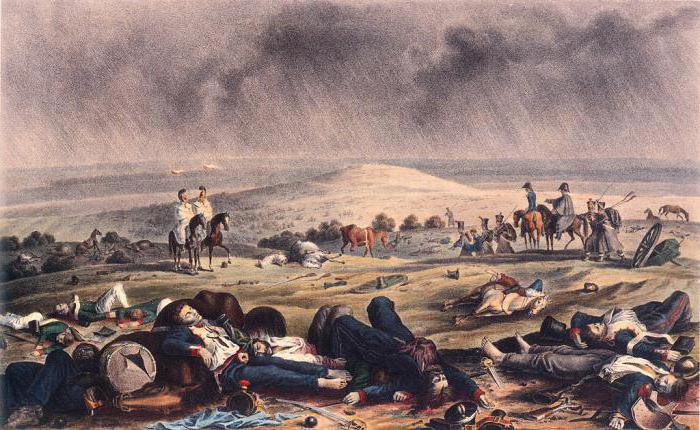 According to the memoirs of contemporaries, Bonaparte appreciated the persistent spirit indestructible Russian, saying that they deserved to be invincible.

The Chronicle of the bloodiest day of battle in painting and graphics were artists on both sides. Russian and French etchings and paintings «Borodino” represent the battle as a document of the era. Rapid pencil sketches engulfed in smoke and dust attacks, and their reflections were later transferred to engravings and lithographs.

French artist J. S. Langlois believed his countrymen victorious in the battle of Borodino, in his drawings, we do not see any defeat of Napoleon's army. A similar bias was deprived fought in the fourth corps Beauharnais draftsman A. Adam. Impartial sketches convey a timeline of events, where there are no losers and winners, but only a resolute struggle for life and death. After returning home, the artist has created a series of works in oil on paper 83 sheets. Then they were reproduced in lithography.

The Unconditional attention, the picture of the battle of Borodino created by Russian artists. Two paintings on this subject was written in the late 19th century, the famous battle-painter Vasily Vereshchagin. The painting “Napoleon Borodinsky heights" (1897) we see the smug and alarmed the Emperor, sitting in deep thought before the formation of his generals, who stare hard through the lenses of his binoculars in the Russian camp. The artist managed to Express the involuntary confusion and uncertainty officers, accustomed to victories. Here they met with something beyond their understanding and experience. 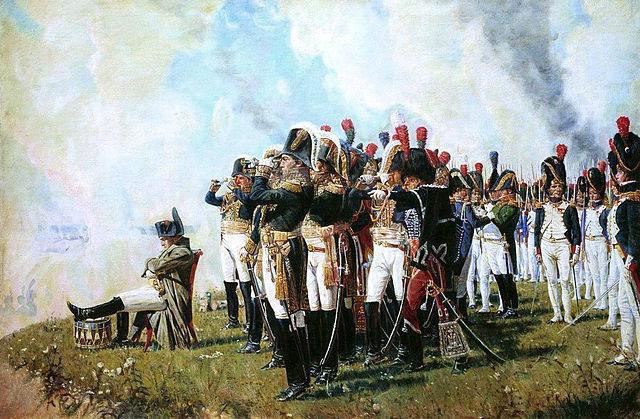 The Other pattern is called “the End of the battle of Borodino”, the artist wrote in 1899-1900. A strange impression is born when I look at this painting. Vereshchagin chose amazing effect – transfer of tragedy and senselessness of the battle, which claimed more than 80 thousand lives through the image of cheering soldiers of the French in the smoky mess of the overturned horse of the bodies of people dying from wounds, bristling with bayonets and flying feathers in the soldiers ' shakos.

At the beginning of the twentieth century

In the first decades of the XX century paintings of the battle of Borodino created a Russian and Soviet painter Nikolai Semenovich Samokish. During the Russo-Japanese war, and then the First world war, he was a war correspondent.

Filled with the greatest tension of the canvas, which depicted the military actions of the life-guard Lithuanian regiment. The sketch made by the oil, the soldiers resolutely rushed to the attack, they are not afraid of bullets, does not stop the fear. Rapid gust supports pictorial composition: lines and color spots rays emanate from the center of the picture, mixing and vanishing beyond it. 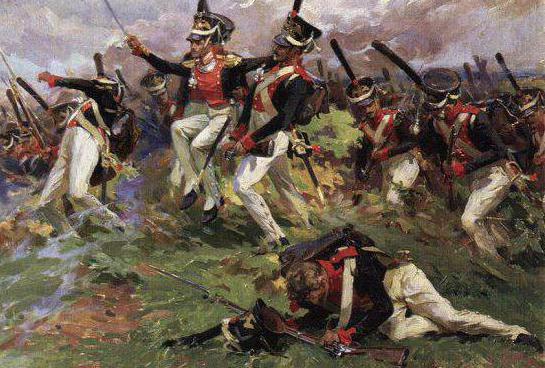 Unprecedented daring and willingness to sacrifice are the soldiers of the life guards Grenadier regiment on the Old Smolensk road in the work of Mitrofan Grekov (1913).

Soviet artists on the battle of Moscow

Dedicated to the events at Borodino picture appeared a half-century after landmark battle. Filled with sorrow scenic “report” about the fatal shooting on the battle field of Peter Ivanovich Bagration in the work of the Georgian artist Alexey Vepkhadze (1948). The fallen General is concentrated, eyebrows sternly frown, he makes an attempt to rise, stretching out a hand to surround his soldiers. No one can believe that the illustrious officer will not get up from the bloody ground. General confusion is contrary to the determination of the hopelessly wounded Bagration.

Pay special attention to the description of the picture “ring” N. N. Pobedinskoe (1960), created in the chart intimate the scene of the break at the night fire. Soldiers rest, forming a circle, busily cleaning their weapons, inspect the details of the clothing, smoked a pipe. Comes to mind the famous lines of Lermontov's poem. Twisted flames, rushes to the sky the smoke from the pot. The faces of the characters serene. But in the background menacingly leaned out from under the wheels the barrel of the gun, and next, folded in a pile, waiting for the battle of the nucleus. At dawn the soldiers will have a serious battle. 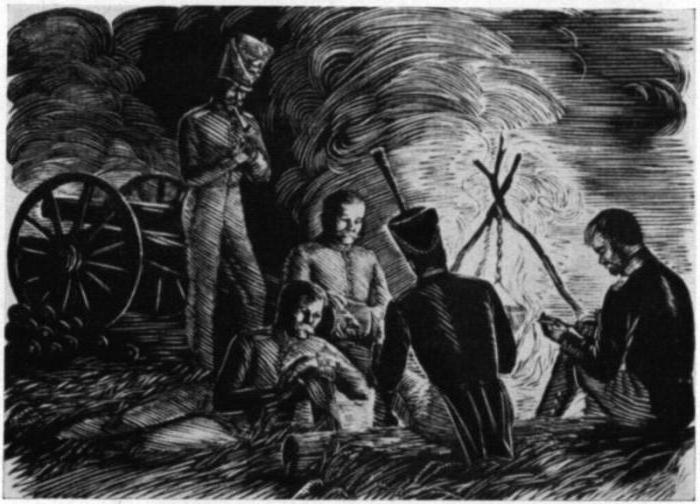 One of the most famous panoramas of the battle of Borodino belongs to the talent of Franz Alekseevich Roubaud, the Russian artist of French origin. The exhibition was opened in 1912 on Clean Ponds. Half a century later, the panorama was restored and placed in a building on Kutuzovsky Prospekt. The project Roubaud is a combination of paintings with three-dimensional layout, making it seems that the battle happens before your eyes.

Panoramic image consists of 12 fragments, dedicated to the most decisive and serious episodes of the battle of Borodino. This action Semenov on the heights, hand-to-hand bayonet fight with the Russian grenadiers division Triana, the attack on the Shevardino redoubt, Bagration seeing the wounded to the rear. The realism of the panorama is fascinating sense of belonging to the greatest in the history of Russia feat.

Legends of the century

Not cool the interest for the previous victories of the Russian spirit over the circumstances of today. In the early XXI century, dedicated to the events of Borodino, paintings of Russian artist Yury Averyanov. 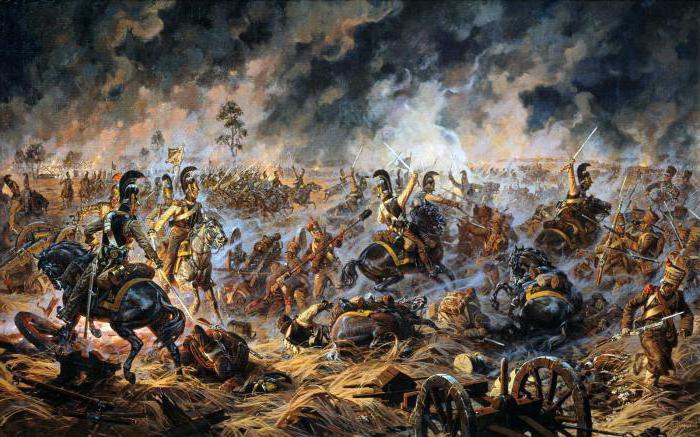 On one of the paintings the artist captures the legendary event when at the moment of reflection hot attack General kostenetskiy, like the epic hero, caught in the hands of artillery swab and began crushing blows to knock the enemy riders. Example of the commander was followed by the soldiers, wielding what was at hand. The attack was repulsed, and the glorious General subsequently received the order of St. George. Fantastic palette, composition, detail paintings Averyanova doing his paintings are equally interesting to the student and the seasoned historian.

Famous sayings about the movie today hearing from many. Watching movies and series is an integral part of the life of any modern man. Rare to meet people who are not interested in such leisure. In the evening, came home after work...