The Great landscape painter Ivan Shishkin takes a special place among Russian artists. Nobody wrote a nature so beautiful and with uncompromising realism, is able by the abundance of love and soul in the work to compete with any romantic canvas.

Almost all the years of experience in the image of the native land is embodied in the painting "Ship grove”. Shishkin was able to convey bright, calm summer forest with a rich palette of colors. 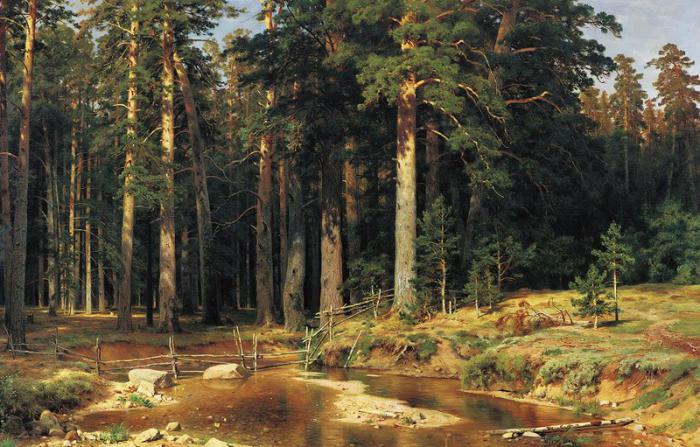 In Russian painting landscapes began to appear in the late XVIII century; among the pioneers of the genre was S. Shchedrin and A. Venetsianov. The main characteristics of the first Russian landscapes were the classicism and realism of the depicted nature.

In the nineteenth century, landscape as a genre of fine arts has acquired extraordinary popularity among the Russian artists and, consequently, with the public. This period knew of many outstanding artists, such as Levitan, Lagorio, Aivazovsky, Vasiliev and other artists-Peredvizhniki. However, a special place in Russian landscape painting, as in the hearts of the public, is Ivan Shishkin. The first public recognition the artist has received for the kinds of suburbs of St. Petersburg, and the painting "Ship grove” Shishkin made his career.

Shishkin think a native Russian artist, not only because the landscape like no other, able to portray the nature of his native land, but also because he loved her more than anything. Ironically, the title of academician brought Shishkin creation “Views of Dusseldorf”.

Shishkin was born in the town of Elabuga and raised in a merchant family. Leaving school, young Ivan Shishkin entered the Moscow school of painting and graduated with distinction from him, continued her studies at the Imperial Academy of Arts. For merits and distinctions during his studies, Shishkin received the right to travel abroad at the expense of the Academy.

He spent several years in Munich, Zurich, Geneva and then in düsseldorf, where he studied the intricacies of it does not give him the animal genre and wrote a paper to compete for the title of academician. Shishkin spent abroad 5 years, from 1861 to 1866, and yearned for his native land, he returned to Russia before the end of their scholarships and then rarely traveled outside of the Empire. 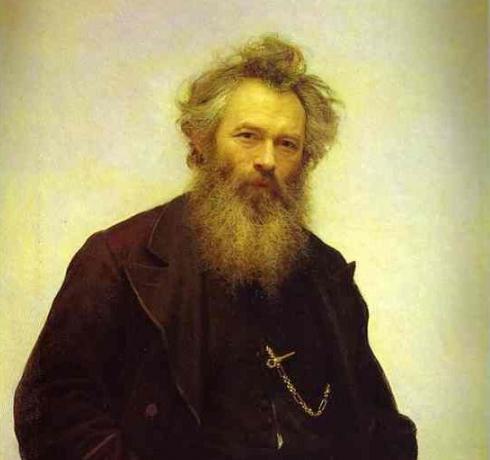 Shishkin was one of the Peredvizhniki and during the ongoing Association of exhibitions became interested in engraving. In 1973 the Imperial Academy awarded the Ivan Shishkin the title of Professor for the painting ‘Forest’, and a short time, the artist was the head of landscape workshop of the Academy. Latest finished painting of the great landscape painter was “Ship grove”. Shishkin died in his Studio, at his easel, on which stood a blank canvas.

The Landscapes of Shishkin

Despite the romantic nature of the landscapes painted by Shishkin in his works no attempts to “embellish” nature, on the contrary — the author writes her like she is, and loves it. It is the love, curiosity and admiration passed complete works and gives them the spirit of romanticism.

Even in the earliest works feels delicate knowledge of plant forms, their characteristics and differences. The work of Shishkin look very real and filled with the unique high technology and image fidelity. Even with the advent of the landscapes of Levitan and Serov, Shishkin has always remained authority for Russian landscape painters. 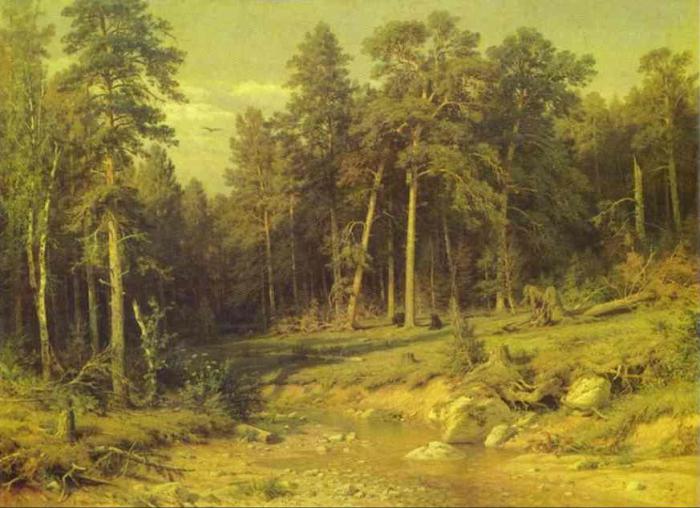 Among the most difficult works especially notable is the painting Shishkin “Ship grove” — the last, almost dying artist canvas. Many critics and art historians call it the ‘comb’ “Pine”, not only because of the pine in the picture direct, but more due to the fact that in his last painting Shishkin was a good use of 40 years experience painter and connoisseur vegetation.

The picture of the “Ship Grove” Shishkin wrote in the year of his death, and it represented the final stage of his career. On a large canvas, the artist decided to portray your favorite pine forest — a story that each picture reveals new, playing with new colors and never ceases to amaze. 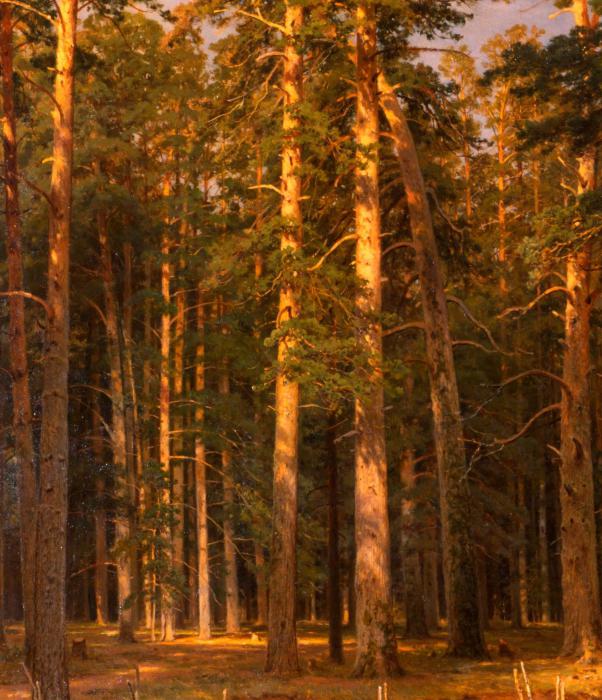 Ivan Shishkin, "the mast-tree grove”: a description of a picture

On canvas depicts a grove near Elabuga — the native place of the artist. In a note by the author to the picture stated that “Saint Athanasius ship grove near Elabuga”. This forest was familiar Shishkin from childhood, and it seems symbolic that the author portrayed in his last picture.

The Simple plot allows the viewer to delve into the perfect combination of colors and the overall atmosphere of the summer forest, not embarrassed with the wind and rain. Continuous forty-year experience of studying of Russian nature expressed itself in every tree and every blade of grass shown in the picture.

A Forest bathed in sunlight and surrounded by the variety of colors and shades, uncharacteristic for earlier Shishkin. The palette of the paintings, on closer examination, impressed the impressionist painters with their richness and diversity. However, Shishkin with his characteristic sense of proportion does not allow the palette to disturb the natural beauty of the landscape, but rather uses color to emphasize it.

The blue sky mixed on canvas with pinkish hues of sunset, a dark forest green and purple-black strokes deep shadows. Blue or sometimes openly in blue on the trunks of the tall pines talking about mossy ancient giants, and parched the verdure of the glade, reminiscent of the aesthetic preferences of the artist — Shishkin always prefer low-key, almost dull the beauty of the summer forest of North-West Russia.

A Characteristic feature of the artist in landscape painting was the ability to always keep the forest in the main focus of the viewer, while bringing it into the background. Shishkin's painting "Ship grove” proves the rule.

In the foreground before the viewer is presented with a Sunny edge and a stream of brownish from the abundance of iron by water, with the edge of a young pine, behind which rise the pine-giants, warmed by the summer sun, whose crown leaving only a few centimeters to a summer sky.

“the mast-tree grove" Shishkin: what kind of trees depicted on the canvas?

The Artist wrote the types of this forest. Afanas ship grove was also the subject of the images of the other famous paintings — “Pine forest», which previously wrote Shishkin. “the mast-tree grove" of the pattern description and analysis work is extremely similar to the description of the “Pine”.

The Painting no wonder is called the «mast-tree grove” — pine shown are not normal, and the ship — by age 80 to 100 years, high and light, up to half a meter in diameter. Boards from these pines were used to build ships, and trunks, logs perfectly as a ship's masts.

The simplicity of the plot more than made up for fine detail, fidelity to each element of the flora, as well as the depth and richness of colors — all the things the audience loved Ivan Shishkin. “the mast-tree grove” is considered the pinnacle work of the great landscape painter.

This national song – it is they. Their music reflected the true Russian reality, not stretching and not artificially-samovar, which it tries to present “gold ring”. They are not silent about what really intereste...

Judging by the fact that in the novel “covered” has not yet the name of Napoleon Bonaparte (and how it could spread in this wilderness, where all live under the laws of antiquity?), the action takes place in the 10-ies...